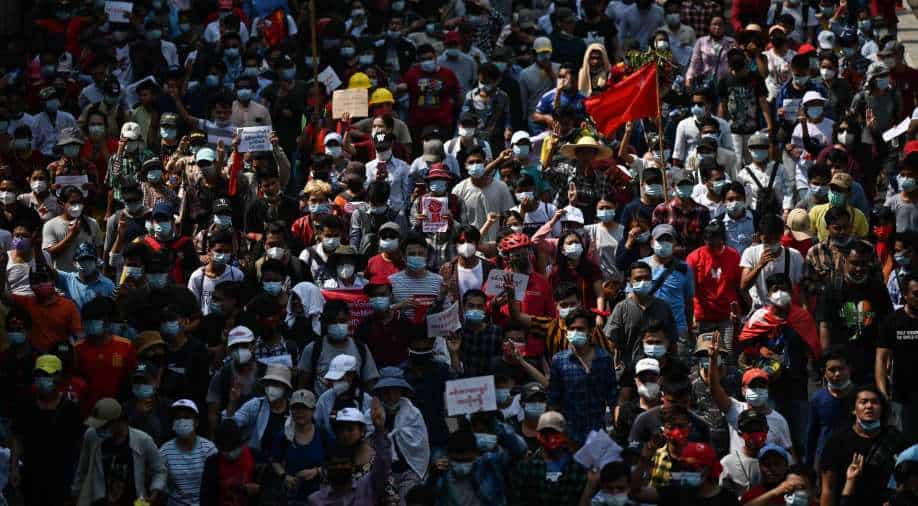 The army takeover that brought a decade-old democracy to an end last week has unleashed a storm of anger and defiance, with huge daily protests bringing urban centres around the country to a standstill.

Protests in Myanmar entered their second week Saturday with neither demonstrators nor the military government they seek to unseat showing any signs of backing off from confrontations.

The army takeover that brought a decade-old democracy to an end last week has unleashed a storm of anger and defiance, with huge daily protests bringing urban centres around the country to a standstill.

Protesters in Yangon, the country's biggest city, again congregated at Hleden intersection, a key crossroads from which groups fanned out to other points, including the embassies of the United States and China. They marched despite an order banning gatherings of five or more people.

Since taking Suu Kyi and her top allies into custody, troops have stepped up arrests of civil servants, doctors and others joining strikes to call on the generals to relinquish power.

Crowds defied overnight curfews to mass on the streets as night fell, hours after finishing a seventh straight day of rallies, following rumours that police were launching a fresh wave of arrests.

People in Yangon skirted a junta ban on Facebook to organise neighbourhood watch groups that warned of rumoured arrests.

More than 320 people have been arrested since last week's coup, according to the Assistance Association for Political Prisoners monitoring group.

An emergency session of the UN Human Rights Council in Geneva called for the new regime to release all "arbitrarily detained" persons and hand power back to Suu Kyi's administration.

The UN deputy rights chief Nada al-Nashif warned Myanmar in the Friday meeting that "the world is watching" events unfold in the country.

News of more arrests did not stop tens of thousands from returning to the streets of Yangon on Saturday, where columns of traffic ground to a halt and blared their horns for five minutes to mark the birthday of Aung San.

Demonstrations also resumed in the second biggest city, Mandalay, with lawyers making up one large contingent.

Saturday's protests coincided with the birthday of Gen. Aung San, the country's independence leader and father of Suu Kyi. His name and image have appeared on signs carried by some demonstrators.

The independence hero and father of Suu Kyi is revered locally for freeing the country from colonial control but was gunned down at the age of 32, just months before the end of British rule.

So far, the generals remain undeterred by the widespread condemnation on the streets -- and overseas.

They justified seizing power with claims of widespread voter fraud in November's election, which Suu Kyi's National League for Democracy (NLD) won in a landslide.

Suu Kyi has not been seen since her detention nearly two weeks ago, though NLD official Kyi Toe said on Saturday she was in Naypyidaw and still in "good health".