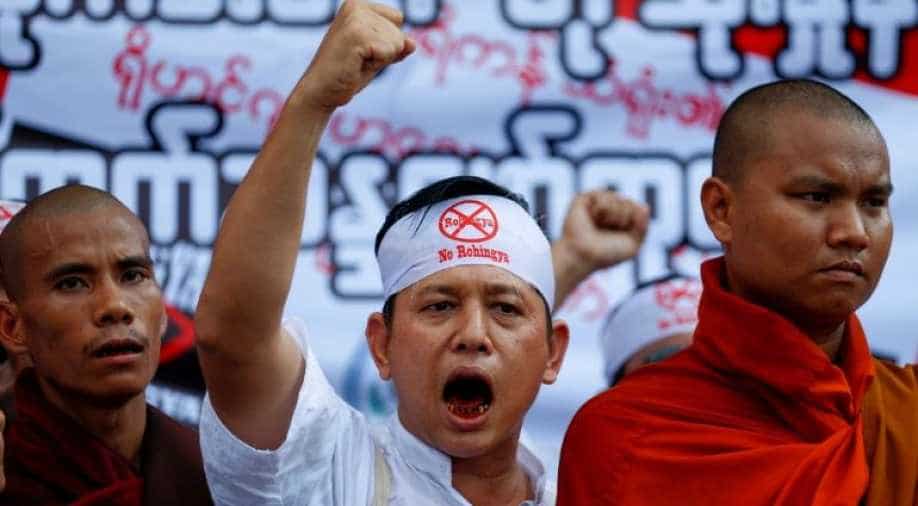 Buddhist monks and nationalists shout slogans in front of the US embassy during an unauthorised demonstration against the use of 'Rohingyas'. Photograph:( Agencia EFE )

The controversial monk is known for his tirades against Muslims, including comments that sparked a wave of sectarian violence against the Muslim population in central Myanmar in 2013.

Myanmar police have issued an arrest warrant for an ultra-nationalist Buddhist monk, known for his anti-Muslim stance.

The warrant was issued for Wirathu on Tuesday night under article 124(a) of the legal code, which forbids inciting hatred or contempt against the government and carries a three-year jail sentence, the police said.

The monk who Time magazine dubbed "The Face of Buddhist Terror," is accused of making defamatory remarks against the de facto leader of the government, Aung San Suu Kyi.

The police have yet to locate Wirathu, who, according to local media reports, was not at the Masoeyein monastery in central Myanmar on Tuesday as he was due to appear before the governing body of the Buddhist clergy in Yangon, the former capital of the country, a day later.

The controversial monk is known for his tirades against Muslims, including comments that sparked a wave of sectarian violence against the Muslim population in central Myanmar in 2013 and for supporting the military operation that led over 700,000 people from the Muslim-majority Rohingya minority to flee to Bangladesh in 2017.

The United Nations has said that there were elements of genocidal intent in that military operation, which has been condemned by several organizations for all kinds of abuses against the Rohingyas, including killings, rapes and burning of houses.

Wirathu was the most visible face of the 969 movements, a Buddhist group that opposed the expansion of Islam in Myanmar, and the now-defunct Patriotic Association of Myanmar, better known as Ma Ba Tha, whose anti-Muslim position led the government to pass several laws considered discriminatory against Muslims.

His controversial comments, which also include calling for a boycott of Muslim businesses and hailing the assassination of a Muslim lawyer close to Suu Kyi, prompted Facebook to close his account and led the Thai authorities to ban his entry into the country, where he was scheduled to deliver a sermon.