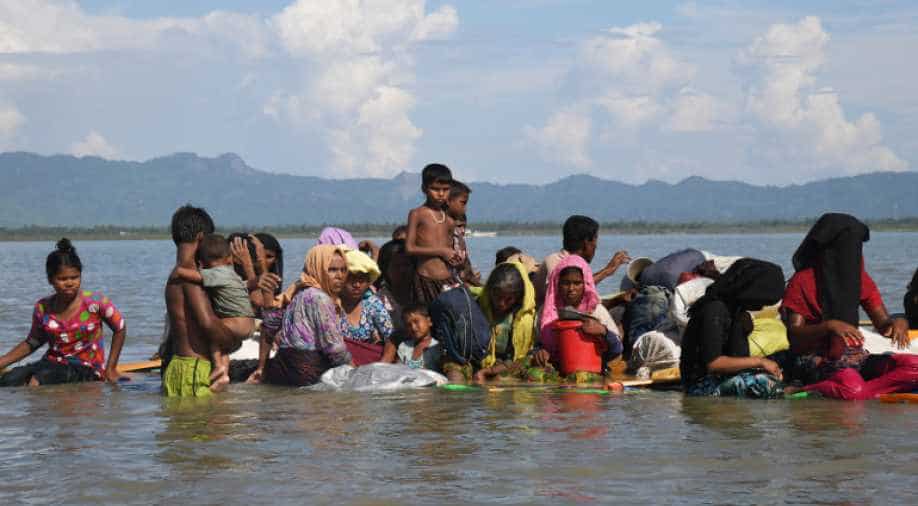 Myanmar says the clearance operation was necessary for national security after Rohingya militants attacked 30 security posts and an army base in the state on August 25. The internal investigation put the number of fighters involved in the attacks at over 10,000, more than doubling an earlier official estimate. Photograph:( Reuters )

Myanmar's army released a report on Monday denying all allegations of rape and killings by security forces, having days earlier replaced the general in charge of the operation that drove more than 600,000 Rohingya Muslims to flee to Bangladesh.

No reason was given for Major General Maung Maung Soe being transferred from his post as the head of Western Command in Rakhine state, where Myanmar's military, known as the Tatmadaw, launched a sweeping counter-insurgency operation in August.

"I don't know the reason why he was transferred," Major General Aye Lwin, deputy director of the psychological warfare and public relation department at the Ministry of Defence, told Reuters. "He wasn't moved into any position at present. He has been put in reserve."

A senior UN official, who had toured the refugee camps in Bangladesh, on Sunday accused Myanmar's military of conducting organised mass rape and other crimes against humanity.

The Myanmar military said its own internal investigation had exonerated security forces of all accusations of atrocities. The investigators' findings were posted on the Facebook page of the military's commander-in-chief, Senior General Min Aung Hlaing.

The developments came ahead of a visit on Wednesday by US Secretary of State Rex Tillerson. He is expected to deliver a stern message to Myanmar's generals, over whom national leader Aung San Suu Kyi has little control.

A spokeswoman for the US State Department, Katina Adams, said the United States was aware of reports of the general's replacement and added:

"We remain gravely concerned by continuing reports of violence and human rights abuses committed by Burmese security forces and vigilantes. Those responsible for abuses must be held accountable."

Lawmakers in Washington are pressing to pass legislation imposing economic and travel sanctions targeting the military and its business interests.

In an op-ed in Britain's Guardian newspaper on Monday, Republican Representative Steve Chabot and Democratic Representative Joseph Crowley said it was time to "expeditiously" impose sanctions.

"The US needs to send a clear message that there is no excuse for a cruel, extensive and grossly disproportionate crackdown on civilians," they said.

The government in mostly Buddhist Myanmar, which is also known as Burma, regards the Rohingya as illegal immigrants from Bangladesh.

Leaders of Asian nations meeting in Manila on Monday skirted around the exodus of the Rohingya, disappointing human rights groups who were hoping for a tough stand.

Maung Maung Soe's transfer was ordered on Friday and Brigadier General Soe Tint Naing, formerly a director in logistics, was appointed as the new head of Western Command.

Made up of three divisions, Western Command is overseen by the Bureau of Special Operations, which reports to the office of Min Aung Hlaing.

Myanmar says the clearance operation was necessary for national security after Rohingya militants attacked 30 security posts and an army base in the state on August 25. The internal investigation put the number of fighters involved in the attacks at over 10,000, more than doubling an earlier official estimate.

Speaking in Dhaka, Pramila Patten, the UN Special Representative of the Secretary-General on Sexual Violence in Conflict, said she would raise accusations against the Myanmar military with the International Criminal Court in the Hague.

"When I return to New York, I will brief and raise the issue with the prosecutor and president of the ICC whether they (Myanmar's military) can be held responsible for these atrocities," Patten said.

"Sexual violence is being commanded, orchestrated and perpetrated by the Armed Forces of Myanmar, otherwise known as the Tatmadaw," Patten said following a three-day tour of the Rohingya refugee camps in the Cox's Bazar region of Bangladesh.

"Rape is an act and a weapon of genocide," she said.

Refugees have accused Myanmar soldiers and Buddhist vigilantes of torching their villages, murdering their families and raping women.

Patten said brutal acts of sexual violence had occurred in the context of collective persecution that included the killing of adults and children, torture, mutilation and the burning and looting of villages.

"The forms of sexual violence we consistently heard about from survivors include gang-rape by multiple soldiers, forced public nudity and humiliation, and sexual slavery in military captivity. One survivor was in captivity for 45 days by the Myanmar army," Patten said.

The Myanmar military's internal probe said that according to 2,817 people interviewed from 54 Rohingya villages soldiers did not fire on "innocent villagers", rape or commit sexual violence against women.

Nor were there any killings or beating of villagers, and the security forces did not carry out any looting or set fire to Rohingya mosques, it said.

The report also concluded that security forces only used small arms in clashes with Rohingya militants and there were no findings to suggest the use of "excessive force".

It also blamed the militants for setting fire to the villages and frightening and coercing people to leave their homes.

Myanmar is refusing entry to a UN panel that was tasked with investigating allegations of abuses after a smaller military counteroffensive launched in October 2016.

The country is in the early stages of a fragile transition to democracy after being ruled by a junta for 49 years, and the generals have retained their autonomy on matters of defence, security and border issues under a 2008 constitution. Three generals are members of the cabinet.

Suu Kyi has said that any alleged atrocities should be substantiated and investigated, while her government is working to stabilise Rakhine in order for the Rohingya to return.

For now, though, the flow is one way. The International Rescue Committee, a New York-based aid agency, reckons that around two-thirds of an estimated 300,000 Rohingya remaining in Myanmar could head across the border in the coming months.