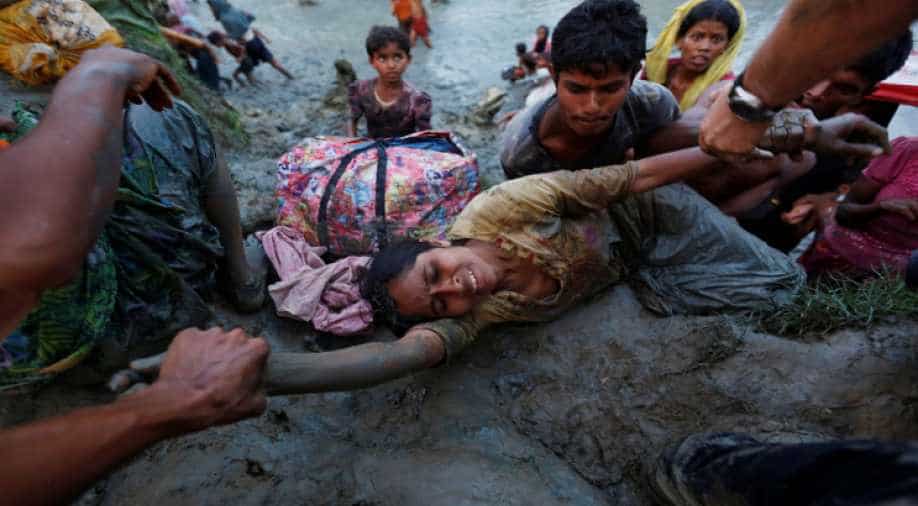 The United Nations has denounced the violence against the Rohingya as a classic example of ethnic cleansing. in photo: A Rohingya woman is pulled out of the Naf river which separates Bangladesh from Myanmar. Photograph:( Reuters )

The United Nations Security Council urged the Myanmar government on Monday to "ensure no further excessive use of military force in Rakhine state," where violence has forced more than 600,000 Rohingya Muslims to flee the Buddhist-majority Asian country.

To appease council veto powers Russia and China, Britain and France dropped a push for the Security Council to adopt a resolution on the situation and the 15-member body instead unanimously agreed on a formal statement.

The council expressed "grave concern over reports of human rights violations and abuses in Rakhine State, including by the Myanmar security forces, in particular against persons belonging to the Rohingya community."

"The Security Council calls upon the Government of Myanmar to ensure no further excessive use of military force in Rakhine State, to restore civilian administration and apply the rule of law, and to take immediate steps in accordance with their obligations and commitments to respect human rights," it said.

Myanmar has been stung by international criticism for the way its security forces responded to attacks by Rohingya militants on 30 security posts. More than 600,000 Rohingya have fled to Bangladesh since Aug. 25.

"The Security Council stresses the primary responsibility of the Government of Myanmar to protect its population including through respect for the rule of law and the respect, promotion and protection of human rights," the statement said.

It stressed the importance of transparent investigations into allegations of human rights abuses and "in this regard, the Security Council calls upon the Government of Myanmar to cooperate with all relevant United Nations bodies, mechanisms and instruments."

Myanmar has refused entry to a UN panel that was tasked with investigating allegations of abuses after a smaller military counteroffensive launched in October 2016.

Myanmar's de facto leader, Aung San Suu Kyi, has pledged accountability for rights abuses and says Myanmar will accept back refugees who can prove they were residents of Myanmar.

The Security Council said it was alarmed by the rapidly deteriorating humanitarian situation in Rakhine state and warned that the increasing number of refugees "has a destabilizing impact in the region."

The council demanded that the Myanmar government allow immediate, safe and unhindered humanitarian aid and media access. It asked UN Secretary-General Antonio Guterres to report back in 30 days on the situation.