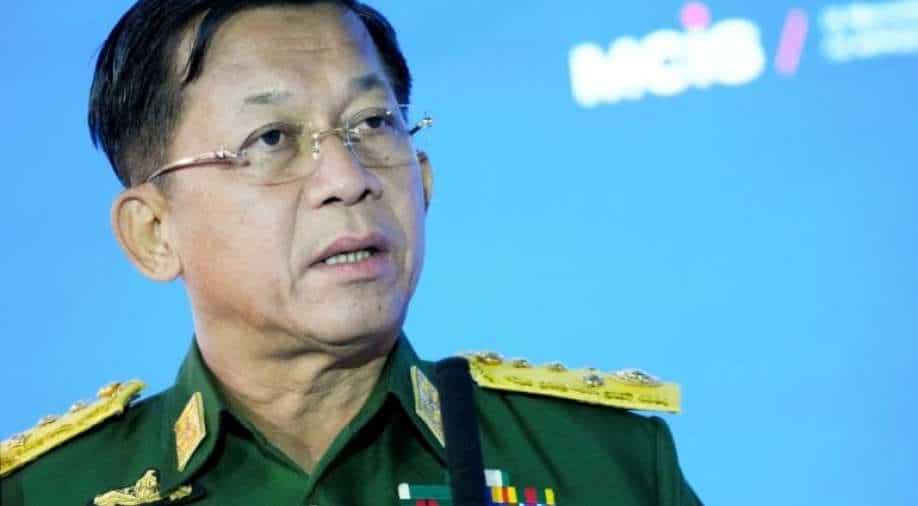 ASEAN decided to invite a non-political representative from Myanmar to its Oct. 26-28 summit, in an unprecedented snub to the military leaders behind the coup against Aung San Suu Kyi's elected government

Myanmar's junta chief on Monday said that the ruling military was committed to peace and democracy, and that the Association of Southeast Asian Nations (ASEAN) should consider the provocations and violence being carried out by its opponents.

In his first comments since Myanmar's neighbours decided to exclude him from an upcoming ASEAN summit over a lack of commitment to its five-point roadmap, Min Aung Hlaing reiterated the junta's own five-stage plan to restore democracy.

Min Aung Hlaing, who led the Feb. 1 coup that plunged Myanmar into deadly chaos, made no mention of the ASEAN decision but suggested the outlawed National Unity Government (NUG) and armed ethnic groups were trying to sabotage the ASEAN-led peace process.

"More violence happened due to provocations of terrorist groups," Min Aung Hlaing said in a speech on television, where he appeared in civilian attire. "No one cares about their violence, and is only demanding we solve the issue. ASEAN should work on that."

ASEAN decided to invite a non-political representative from Myanmar to its Oct. 26-28 summit, in an unprecedented snub to the military leaders behind the coup against Aung San Suu Kyi's elected government.

Min Aung Hlaing said Myanmar wanted ASEAN's special envoy, Erywan Yusof, to visit the country as agreed, but some of his demands were non-negotiable. He did not elaborate.

The NUG, a broad alliance of anti-coup groups that includes members of Suu Kyi's ousted ruling party, has backed the training and formation of militias called "People's Defence Forces" behind attacks on security forces in several regions of the country.

The NUG recently declared a nationwide rebellion against military rule.

The shadow government on Monday welcomed ASEAN's exclusion of the junta leader but said the NUG should be the legitimate representative.

"ASEAN excluding Min Aung Hlaing is an important step, but we request that they recognise us as the proper representative," said its spokesman Dr. Sasa.

However, he said the NUG would accept inviting a truly neutral alternative Myanmar representative.

ASEAN's decision was an unusually bold step for the consensus-driven bloc, which traditionally favours a policy of engagement and non-interference.

Brunei, ASEAN's current chair, issued a statement citing a lack of progress on a roadmap that the junta had agreed to with ASEAN in April.

A spokesman for the military government at the weekend blamed "foreign intervention" for the decision.

Myanmar has been in turmoil since the coup, which ended a decade of tentative democracy and economic reform. Thousands of its opponents have been arrested, including Suu Kyi.

Security forces have killed more than 1,100 people, according to activists and the United Nations.

inutes after Min Aung Hlaing's speech, state television announced that more than 5,600 people arrested or subject to arrest warrants over their roles in anti-coup protests would be freed in an amnesty.

It said the decision was on humanitarian grounds and blamed the shadow government for causing the unrest.