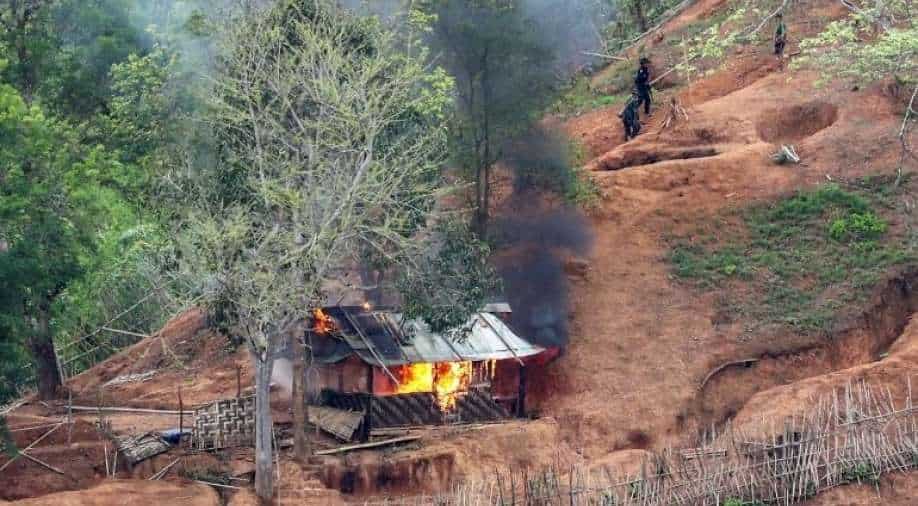 Myanmar's junta and villagers traded accusations Wednesday after a settlement was razed almost entirely to the ground in the centre of the coup-wracked country.

Villagers of Kin Ma in central Magway region told AFP junta forces were to blame for its near-destruction, while the military said "terrorists" and windy weather were responsible.

Mass protests against the February 1 coup have been met with a brutal military crackdown and violence has flared in several communities across Myanmar as civilians form "self-defence" forces to oppose the junta.

Junta troops came to the village on Tuesday hunting for members of a local self-defence force, one resident, a 48-year-old man who wished to remain anonymous, told AFP.

"As people ran, they (the military) shot the village with a rocket launcher. And then we saw the fire coming out from the village," he said.

"We thought they wouldn't destroy anything so we ran without taking any properties and left everything at home."

"There were 250 houses in the village, now there are only about 20 left," another villager told AFP, adding an elderly couple who were unable to flee had been killed in the fire.

"My house was also burned down to ashes... only the tin pole is left," he said.

Images published by local media showed plumes of smoke rising into the sky and the charred remains of buildings.

Local media also said an elderly couple had died in the fire.

According to junta authorities, the blaze started after "40 armed terrorists" torched the house of a local member of a pro-military party.

"Because of wind, the fire spread to nearby houses and about 70 percent of the village was burnt," the junta's media team said in a statement.

The military has sought to quell mass anti-coup protests with bloody crackdowns that have killed more than 850 civilians, according to a local monitoring group.

This has prompted civilians in some townships to form "defence forces", while some of Myanmar's ethnic rebel armies have stepped up offensives against the military.