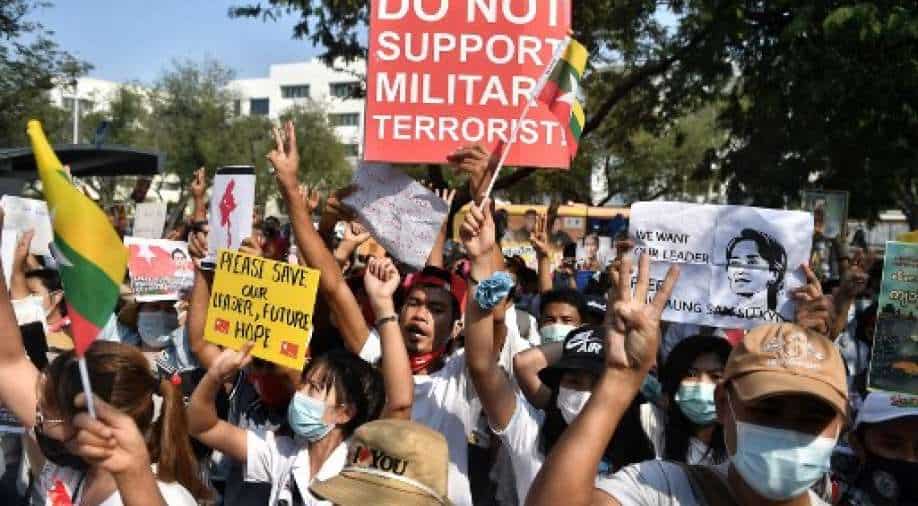 So far, Myanmar has sparked a refugee crisis, threatened border security and political stability. What else qualifies as a security threat?

In august 2017, hundreds of thousands of Rohingyas arrived on the beaches of Bangladesh. Around 60% of them were children.

They were fleeing what the United Nations later called a textbook example of genocide. Myanmar's military had burned Rohingya villages to the ground, separated and killed families, gangraped women and girls, committed unspeakable atrocities.

The world is carrying the weight of Myanmar's misdeeds. And now, the world is bracing for another challenge. After a genocide, Myanmar is now pulling off a coup.

The military is using battle weapons against civilians. It is giving terror groups a free run.

Case in point- the Arakan army, or the AA. It was placed on the list of terror groups in 2020. This was under the government of ousted state counsellor Aung San Suu Kyi. Myanmar's military has delisted the same Arakan Army. It poses no threat, says the military.

The truth is, the military wants to use the terror army to terrorise civilians, quash the civil disobedience movement. They've already killed at least 70 people.

The terror is far from over. And its threat is spreading beyond the country's borders. Myanmar is becoming a security nightmare for the region. It may sound like a sweeping statement.

Let's start with India.
The coup in Myanmar has put India's border security at risk. India shares a 1,643 km-long border, kinship and a colonial history with Myanmar.

While Myanmar burns, it is the Indian state of Mizoram that's hurting. There are sit-ins in Mizoram in support of Myanmar's civilians.

On the 24th of February, Mizoram's chief minister Zoramthanga assured the state assembly that his government will be ready to assist refugees. It's an interesting history. The Chin people of Myanmar are the ethnic brethren of India's Mizos and Kukis. The boiling of passion is understandable.

But it's in conflict with New Delhi's stand. India has constructive engagements with the military junta. They work together in counter-terror operations. New Delhi is currently walking a geopolitical tightrope. A slight disbalance can threaten India's border security...

Then we have Bangladesh.

Look at the kind of trouble Myanmar has put Dhaka in. It is now home to the world's biggest refugee camp.

The Kutupalong camp is one of the many Rohingya camps in Bangladesh. The country is supporting over 1.4 million Rohingyas without much international aid. It recently spent $350 million to develop a sustainable shelter for rohingyas in the Bhasan Char island. Just when Dhaka thought it had got a grip on the refugee crisis, the coup has sparked fears of a fresh exodus.

Those already in Bangladesh are now all the more scared to go back to Myanmar.

Next, we come to Thailand.

Bangkok is calling the situation in Myanmar one of the "most difficult political incidents'' in a neighbouring country. The coup has led to rising fears of a new wave of political asylum seekers in Thailand.

The Bangkok Post reports that in the first week of March, more than 100 people from Myanmar sneaked into Thailand via various human-smuggling routes in Tak and Kanchanaburi.

Let's look at the Association of Southeast Asian Nations (ASEAN) next.

Myanmar is a part of it. And it is now challenging the very relevance of this group. Foreign ministers from all of these countries held a meeting with the junta's new foreign minister. This happened on the second of March.

Brunei- the current chair of ASEAN - published a statement: "We reiterated that the political stability in ASEAN member states is essential to achieving a peaceful, stable and prosperous ASEAN community."

A security threat does not always have to be a threat to life or territory.

Think about it. Why would a small country, thousands of miles away from Washington be a security threat to the US?

Because in Myanmar, it is democracy that is under attack. Myanmar's military coup has become a security threat to democracies around the world. The threat becomes even more serious when you consider Myanmar's geographical and diplomatic proximity to one northern neighbour: China.

A country that seems to be justifying the coup, by calling it a mere reshuffle.

In 2020, China used the pandemic to impose authoritarianism in Hong Kong.

As we speak, it is moving to vet the city state's political candidates. Its neighbour followed suit.

On the first of February, Myanmar's military staged a coup. It justified the takeover with an unproven assumption that the elections were rigged. It acted with surprising impunity.

Fingers were pointing at China. Experts say Myanmar's junta could not have pulled any of this off without Beijing's support. China's statements are only adding weight to the allegation.

This is a period of worrying uncertainty. So far, Myanmar has sparked a refugee crisis, threatened border security and political stability. What else qualifies as a security threat?