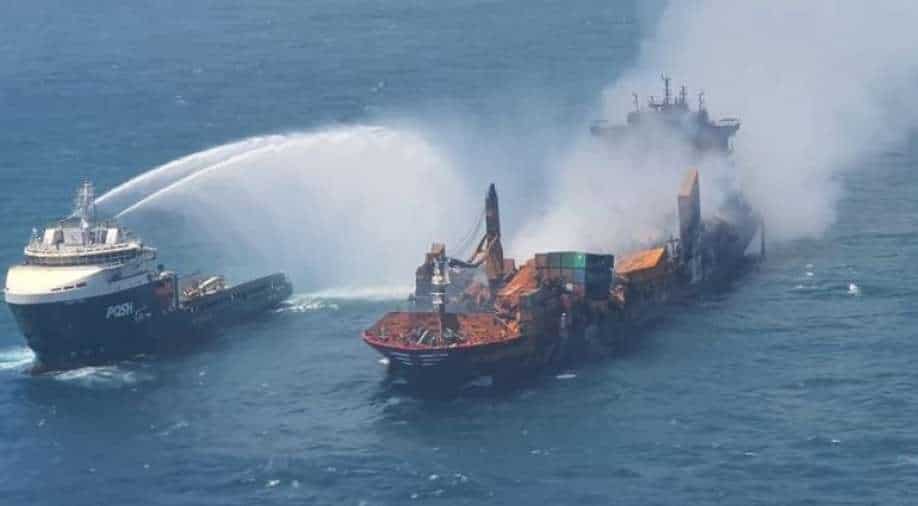 Sri Lanka is seeking $40 million in damages from the ship's operators, X-Press Feeders, over what officials have described as the 'worst marine disaster' in the country's history

A sinking fire-damaged container ship could take months to salvage because of rough monsoon seas, Sri Lanka said Tuesday, as authorities investigated whether the deaths of dozens of turtles and dolphins were caused by the disaster.

Coast Conservation Minister Nalaka Godahewa said he wanted the vessel removed so it would not pose a further pollution risk.

"We want the wreck removed yesterday, but salvors can't start their work in current conditions," Godahewa told reporters in the capital Colombo.

The monsoon season started this month and usually ends in September.

Salvors believe the ship's fuel oil burnt out during the blaze, but Godahewa said authorities remained on standby for potential leaks.

The island's wildlife authorities are also investigating the deaths of a number of turtles and dolphins after dozens of carcasses washed ashore over the past few weeks.

Godahewa said autopsies were being conducted to determine if they died due to pollution from the ship.

The probe came ahead of the arrival of three United Nations Environment Programme experts on Wednesday to help the South Asian nation estimate the damage caused by the incident.

The vessel was known to be carrying 81 containers of hazardous chemicals, including 25 tonnes of nitric acid, when it caught fire.

Sri Lanka is seeking $40 million in damages from the ship's operators, X-Press Feeders, over what officials have described as the "worst marine disaster" in the country's history.

Environmentalists are suing the government and X-Press Feeders for allegedly failing to prevent the disaster, while Sri Lankan police have also launched a criminal probe against the ship's captain, chief engineer and chief officer.