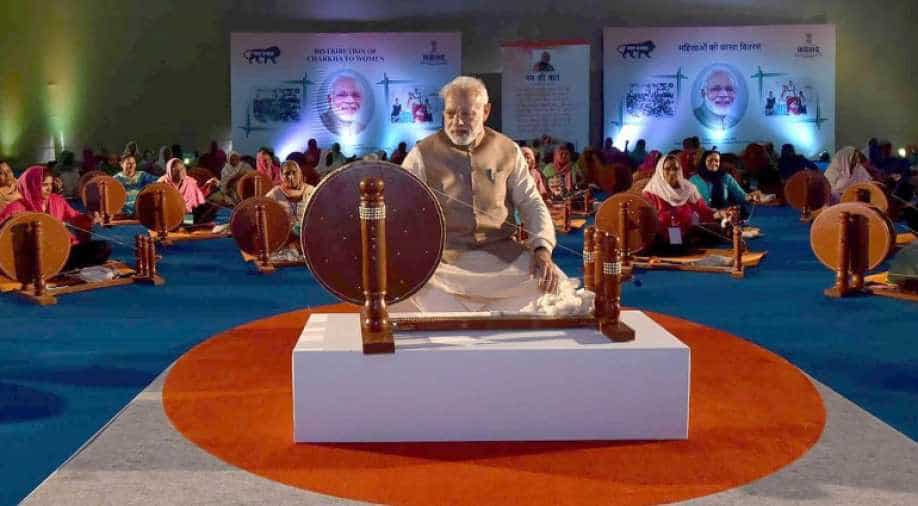 The Khadi Village Industries Commission calendar this year had a picture of Modi sitting at a spinning wheel rather than Gandhi. (Image source: PIB) Photograph:( Others )

"Congress and other parties are bankrupt in terms of issues... Congress is suffering from Modi-phobia. They hate the Prime Minister," BJP leader Shrikant Sharma told ANI.

Drawing a parallel between the ruling party and the former ruling regime, Sharma said Prime Minister Modi has always promoted Khadi and Mahatma Gandhi's views, whereas, the Congress had only insulted the Father of the Nation and used him to loot the country.

"Prime Minister Modi has always promoted Khadi, and it is his efforts only that the sale of Khadi has increased so much...Nobody can replace Gandhiji, he is our icon. We are only pursuing Gandhiji's ideas. He wanted upliftment of the poor and that is what we are working towards. Congress used Gandhiji only to loot the nation. It is Congress which has insulted Gandhiji. We are only giving him respect," said Sharma.

Toeing the same sentiments, another BJP leader Shahnawaz Hussain also alleged the Congress of using Mahatma Gandhi for political benefit. "Earlier when other faces also appeared on the calendar then Congress didn't have a problem with it. Now, this is issue being raised for political benefit. But, people understand everything. Some people used Gandhi ji for their party benefit, but Prime Minister is using Gandhi ji's views for the betterment of the country," Hussain told ANI.

In a big development, Mahatma Gandhi's picture weaving khadi on a simple charkha, wearing his trademark cloth has been replaced by Prime Minister Modi's picture in the same classic pose as that of the former in the KVIC diary and calendar. However, it took a new turn on Friday as sources said the calendar never featured the picture of Father of the Nation.