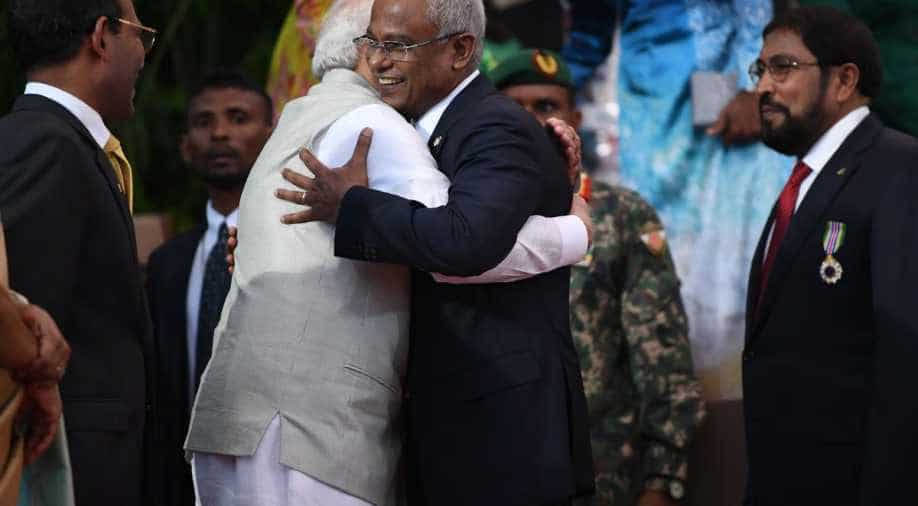 Maldives on Saturday witnessed a change, a change that was welcomed by New Delhi both by actions and words.

Ibrahim Mohamed Solih took oath as the new president of the Maldives in the presence 17 foreign dignitaries and representatives from 46 countries.

PM Modi's presence was at the highest level presence by any country and India was also the only country invited at the Head of State/Government level. And the symbolism was clear from the start.

But symbolism aside, words also played a major role. The Maldivian president during his address to the nation after the oath-taking ceremony mentioned India. "we will endeavour to fortify existing ties with India. The Maldives will hereupon bolster its shared role to retain enduring peace & harmony of the Indian Ocean," he said.

India was the only country mentioned in President Solih speech.

Congratulations to Mr. @ibusolih on taking oath as the President of the Maldives.

Wishing him the very best for his tenure ahead.

Looking forward to working with him to strengthen bilateral relations between our nations. pic.twitter.com/HryxQQMadt

Immediately after the inauguration, in a special gesture, PM Modi was warmly received by Maldivian President at his office. Later a joint statement was released which "noted the resilience of the relations between India and the Maldives".

Both the leaders also expressed confidence in the renewal of the close bonds of cooperation and friendship with Solih as the President of the country.

Experts believe visit by India PM to the Maldives on the occasion of oath-taking ceremony of the new president sends a message.

A message that India fully backs the new government.

Interestingly, Maldives is the only SAARC country that Modi has not visited since taking over as prime minister in 2014.

The short visit had a lot of deliverables from terror to people to people contact to economics to stability in the Indian Ocean region. Both leaders agreed to the need for facilitating easier visa procedures.

Under President Yameen, people to people ties had suffered with Indians being denied visas and work permits. Indians are the second largest expatriate community in the Maldives with an approximate strength of around 22,000. Of the country’s approximately 400 doctors, over 125 are Indians.

Similarly, around 25 per cent of teachers in the Maldives are Indians

On the economic front, president Solih briefed Prime Minister Modi on the dire economic situation facing his country and discussed ways in which India can continue development partnership.

Solih highlighted the pressing need for increased housing and infrastructure development as well as establishing water and sewerage systems in the outlying islands.

The fear is that under former president Yameen, due to the dependence of increased Chinese infrastructure projects, the country might be having a serious debt.

He also conveyed India’s readiness to extend help in every possible way and suggested that both sides should meet at the earliest to work out details as per requirements of the Maldives.

India is a leading development partner of Maldives and has established many of the leading institutions of Maldives. After the tsunami that struck the Maldives on December 26, 2004, India was the first country to rush relief and aid.

On the Indian ocean region both leaders agreed on the "importance of maintaining peace and security in the Indian Ocean and being mindful of each other’s concerns and aspirations for the stability of the region", the joint statement said.

Prime minister Modi extended an invitation to President Solih to make a State Visit to India at his earliest convenience. The Minister of Foreign Affairs of Maldives will be visiting India on 26th November to hold further discussions and to prepare for the forthcoming State Visit of President Solih to India.