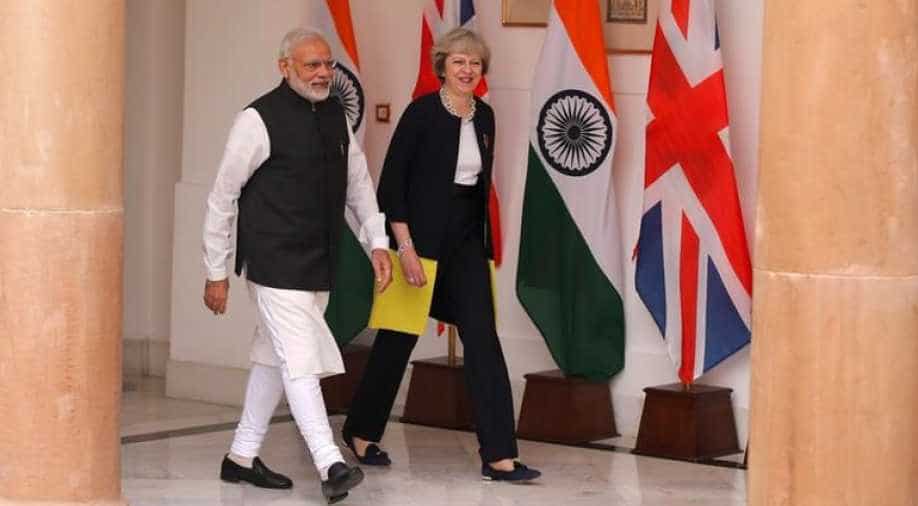 May, making her first bilateral trip outside Europe since Britons voted on June 23 to quit the bloc, described as 'limitless' the potential of the relationship with India and its market of 1.3 billion people. Photograph:( Reuters )

British Prime Minister Theresa May offered India a possible improved visa deal on Monday, as the two countries kicked off talks on boosting trading links ahead of Britain's departure from the European Union.

May, making her first bilateral trip outside Europe since Britons voted on June 23 to quit the bloc, described as "limitless" the potential of the relationship with India and its market of 1.3 billion people.

She attached a condition to a better deal, however: progress in sending home Indians who have outstayed their visas. That harked back to her tough line as interior minister and the mandate she says the Brexit vote gave on curbing immigration.

"The UK will consider further improvements to our visa offer if, at the same time, we can step up the speed and volume of returns of Indians with no right to remain," May told reporters in New Delhi after talks with Prime Minister Narendra Modi.

A source in May's office said any improvements would be about the visa process, such as cost and speed, rather than criteria applicants must meet.

In Modi, May found a host keen to link market access to freedom of movement - the very issue that will complicate her own efforts to extract Britain from the EU without being cut off from the bloc's lucrative single market.

"We believe that such a group should not only focus on ways to increase trade in goods, but also on the expansion of services trade, including through greater mobility of skilled professionals," Modi told reporters.

His comments highlighted the interests of India's burgeoning IT services sector whose main base is Bengaluru. May visits the south Indian city, known as the world's back office, on Tuesday.

May endorsed India's aspirations as a rising 21st-century power, backing its bid for a permanent seat on the United Nations Security Council and promising to cooperate on cyber security to counter violent extremists.

But she did not go as far as her predecessor, David Cameron, who on a 2010 visit said that Pakistan, India's regional arch rival, should not "promote the export of terrorism".

Modi said he had conveyed to May his deep concern regarding cross-border terrorism and the need for the international community to take strong action against states that support and sponsor it.

He did not refer directly to Pakistan but tension has been running high for months, after street protests in Indian-ruled Kashmir, an attack on an Indian army base near the frontier in September, and a series of ensuing border clashes.

Looking ahead to a post-Brexit world, May said she wanted Britain to be a committed advocate of free trade.

"It's why - as Britain leaves the EU - we're determined not to turn our backs on the world but to forge a new, global, outward-looking role for ourselves," she earlier told an India-UK Tech Summit.

"Because we know from history what happens when countries do not embrace the opportunities of the world. They stagnate. They get poorer. They don't protect their people. They get worse off."

May also said that more 1 billion pounds ($1.24 billion) in deals would be signed during her trip, and by partnering with Modi's initiative to build 100 "smart" cities, British business could unlock a further 2 billion pounds over five years.

Modi, addressing the tech summit, called for "greater mobility and participation of young people in educational and research opportunities" - a reference to the sharp fall in the number of Indian nationals studying in Britain.

Some of May's cabinet colleagues and business leaders in both countries have urged May to exclude foreign students from Britain's statistics on net migration, which May has vowed to bring below 100,000 a year, from 336,000 in 2015.

Responding, the head of the Indian government's policy think tank said that, while India was opening up its manufacturing and defence sectors to foreign investors, its professionals faced restrictions on working in Britain and other Western countries.

"There is no such thing as selective free trade," Amitabh Kant, best known as the originator of the "Incredible India" tourism promotion, told the tech summit, when asked about May's emphasis on striking a free trade deal with India.