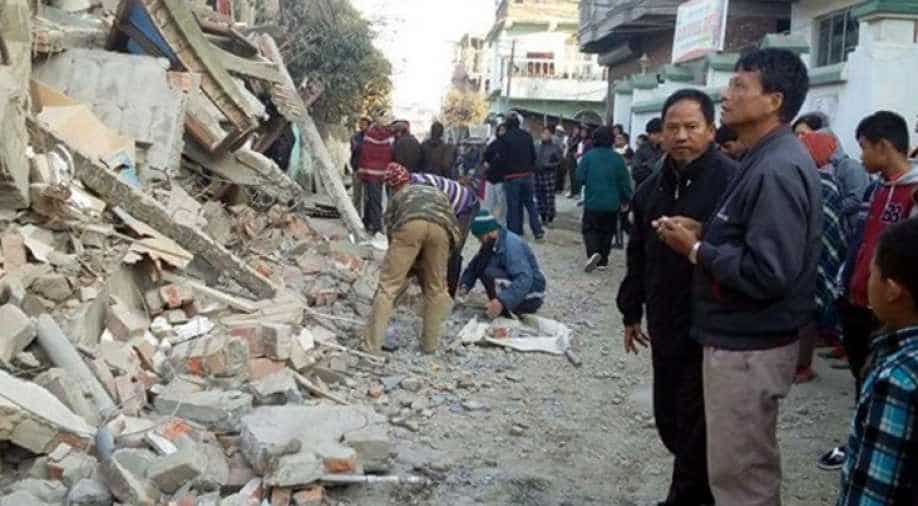 The effects may extend into Myanmar and beyond, says the latest study. In photo: People view a damaged building in Manipur after severe earthquake on January 4, 2015. Photograph:( Getty )

Follow Us
A huge earthquake may be building beneath Bangladesh, which can turn urban areas in eastern India into "ruins", a new study has warned.

They estimate that at least 140 million people in the region could be affected if the boundary ruptures; the destruction could come not only from the direct results of shaking, but changes in the courses of great rivers, and in the level of land already perilously close to sea level.

The newly identified threat is a subduction zone, where one section of earth's crust, or a tectonic plate, is slowly thrusting under another.

Strain between tectonic plates building for at least 400 years

All of earth's biggest known earthquakes occur along such zones; these include the Indian Ocean quake and tsunami that killed some 230,000 people in 2004, and the 2011 Tohoku quake and tsunami off Japan, which swept away more than 20,000 and caused the Fukushima nuclear disaster.

Up to now, all known such zones were only under the ocean; this one appears to be entirely under the land, which greatly multiplies the threat.

The strain between the plates has been building for at least 400 years -- the span of reliable historical records, which lack reports of any mega-quake, said lead author Michael Steckler, a geophysicist at Columbia University.

When an inevitable release comes, the shaking is likely to be larger than magnitude 8.2 on the Richter scale and could even reach a magnitude of 9, similar to the largest known modern quakes, said Steckler.

A giant plate comprising India and much of the Indian Ocean has been thrusting northeasterly into Asia for tens of millions of years, researchers said.

This collision has caused the Himalayas to rise to the north, bringing events like the 2015 Nepal quake that killed nearly 9,000 people.

Bangladesh and eastern India sit atop a landscape vulnerable even to moderate earthquakes: the vast delta of the Ganges and Brahmaputra rivers, researchers said.

This is basically a pile of mud as deep as 12 miles, washed from the Himalayas to the coast, covering the subduction zone.

In a quake, this low-lying substrate would magnify the shaking like gelatin, and liquefy in many places, sucking in buildings, roads and people, said study coauthor Syed Humayun Akhter, a geologist at Dhaka University.

"We don't have a good idea of its geometry, we don't know how far it goes down," said James Ni, a seismologist at New Mexico State University.

He said that if researchers are right, and the slab is building strain, a quake would probably turn urban areas in eastern India "into ruins," and effects likely would extend into Myanmar and beyond.

The findings appear in the journal Nature Geoscience.