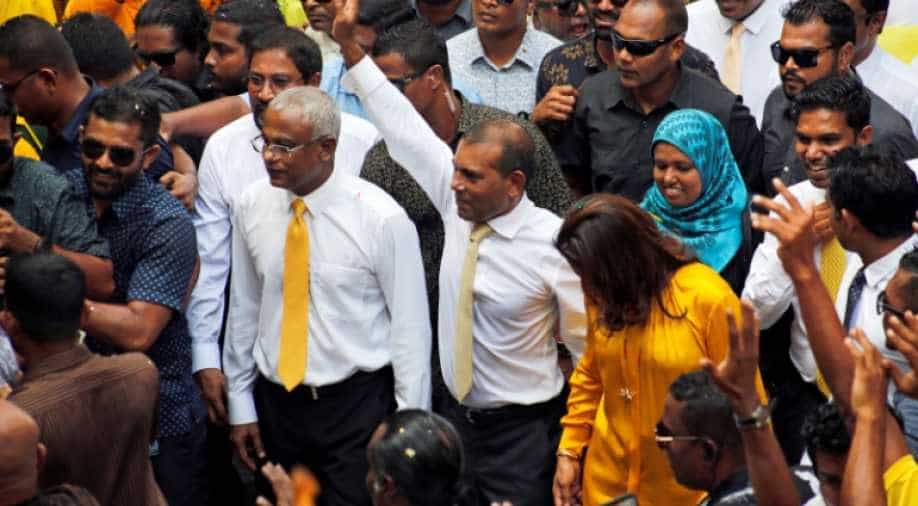 President Ibrahim Mohamed Solih's administration is reviewing contracts awarded by his predecessor Abdulla Yameen. Most went to Chinese firms and are feared to have left the country in debt.

Maldives' new finance minister said on Monday that China is executing infrastructure projects at vastly higher prices than originally proposed but the island nation cannot get out of its commitments now.

President Ibrahim Mohamed Solih's administration, which took office this month, is reviewing contracts awarded by his predecessor Abdulla Yameen. Most went to Chinese firms and are feared to have left the country in debt.

During a five-year building spree, China built a sea bridge connecting the capital city of Male to the main airport on another island and is developing the airport itself as well as building mass housing on land reclaimed from the sea.

But Finance Minister Ibrahim Ameer told reporters during a visit to New Delhi that his officials had spend the first week in office trying to reconcile loans that the previous government took for these projects and the sovereign guarantees that it gave for them.

"We believe that most of these projects are at inflated prices, and so we are looking at them," Ameer said.

But he said the government could not go back on the contracts because many of these, including the bridge, were already completed.

"We cannot do much in terms of renegotiation but going forward our objective would be to reduce the cost of our infrastructure projects," he said.

One of the projects was a hospital in Male awarded to China which had already run up a cost $140 million, far more than a rival offer $54 million that was originally made, Ameer said.

China has built ports, bridges and highways in countries stretching from Bangladesh, Nepal, Sri Lanka, and its ally Pakistan as part of its Belt and Road Initiative for a trade and transit corridor across Asia and into Europe.

But of late it has faced criticism that many of its massive projects costing millions of dollars are pushing the smaller countries into debt.

India, which has been traditional partner for most of the South Asian countries, has in addition viewed the expansive Chinese diplomacy as aimed at securing an outpost in some of the island nations such as Sri Lanka and the Maldives.

Maldives' foreign minister Abdulla Shahid said he had assured Indian leaders that his country wanted the best of ties with its immediate neighbours and would return to an "India First" policy.

China has rejected allegations it was driving the Maldives to debt and said it hopes the new government will continue with policies to attract investment.