Kabul hotel reopens after deadly attack but guests stay away 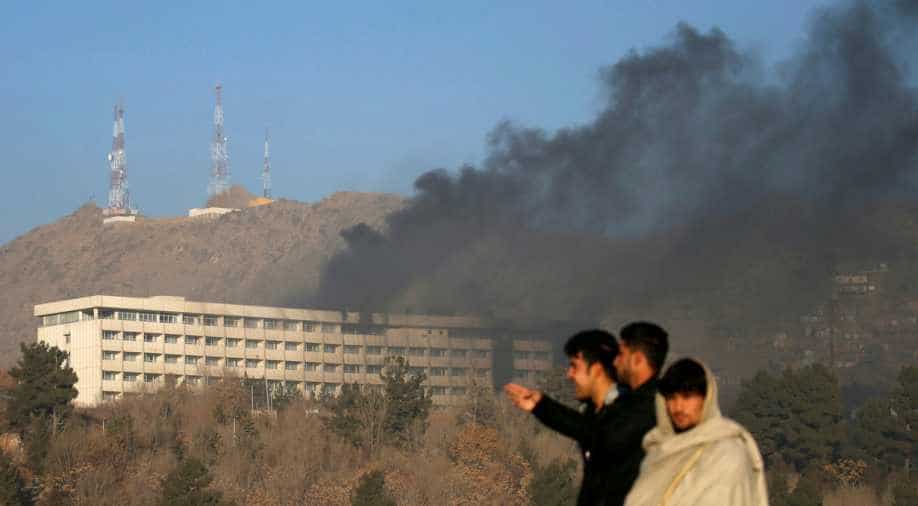 Smoke rises from the Intercontinental Hotel during an attack in Kabul, Afghanistan Photograph:( Reuters )

The piano notes of Richard Clayderman`s "Romeo and Juliet" accompanied Taliban gunmen as they rode gold mirrored elevators to the upper floors of a luxury Kabul hotel in search of guests to kill.

Stopping on nearly every floor of the Intercontinental Hotel, the heavily armed militants went from room to room, blasting away electronic door locks and shooting terrified guests during the hours-long attack on January 20.

At least 25 people, including 15 foreigners, were killed. Nearly seven weeks on, media was allowed to inspect the still badly damaged hilltop hotel overlooking the Afghan capital after it partially reopened its doors to the wary public.

Having repaired the ground floor, workmen ride up and down the landmark hotel`s plush elevators as they strip and rebuild the upper four floors that were also shot up, bombed and set alight in the raid.

The soothing piano music inside the lifts, which sales and marketing manager Rohullah Nawab said was also playing that night, provides a chilling contrast to the destruction in the hallways and rooms.

The smell of smoke permeates the upper floors where bullet-riddled mirrors, blackened walls, shattered door locks and burned carpets provide a grim reminder of the carnage caused during the 15-hour ordeal.

Clear plastic sheets are draped over furniture stacked up in some rooms as workmen paint walls, replace electrical wiring and install new windows and doors.

Nawab estimates it will take five months and around 40 million afghanis (nearly $600,000) to restore the government-owned hotel - which does not belong to the global InterContinental chain - to its former glory.

Repairing its reputation, however, will probably take much longer.

On the night of the attack 173 guests had checked into the 200-room hotel, Nawab said. Since then not a single room on the first floor - the only one undamaged in the attack - has been reserved in recent weeks since it reopened.

The ground-floor restaurant, where militants pretending to be guests launched the assault by opening fire on diners, has been repaired and every trace of the bloody incident erased.

But the buffet lunch - salads and silver dishes of hot food - had no takers when reporters visited, and Nawab said only a handful of people had dared to eat there since the assault. The hotel`s revenues have been devastated, plunging from more than one million afghanis a day to around 50,000 afghanis, Nawab said, with a couple of wedding parties and official functions providing succour.

But Nawab is confident the hotel will remain open. "It`s a historical hotel. The government will never close it," he said.

To entice people back, the Intercontinental, which opened in the 1960s, has launched a publicity campaign on Afghan television talking up its history and offering discounts of up to 50 per cent on food, rooms and events.

"It takes a lot of time to get back to business. It shocked the foreign community," Nawab said.

Officials remain silent over how the attack was carried out. The interior ministry has submitted a report of its investigation to President Ashraf Ghani but there has been no public announcement.

Around a dozen hotel and security staff have been detained amid speculation the Taliban may have had insider help.

The deputy head of security told last month that guards were ordered to wave through a car later revealed to be carrying militants and explosives ahead of the deadly assault.

Visitors to the hotel reported lax security before the attack - something that does not appear to have changed.

When media visited this week the privately-owned Kabul Balkh Safety & Security was still manning the vehicle checkpoints on the road leading up to the hotel, the only baggage scanner was still not working, and there were no armed guards inside the hotel.

Rohullah told that the hotel was waiting for the National Directorate of Security, Afghanistan`s spy agency, to give advice on security upgrades.

Memories of the attack are still fresh in the minds of employees who returned to work several weeks after the raid.

Two waiters who jumped from the fourth floor are still in the hospital, said Nawab, who himself narrowly avoided being caught up in the shooting inside the restaurant.