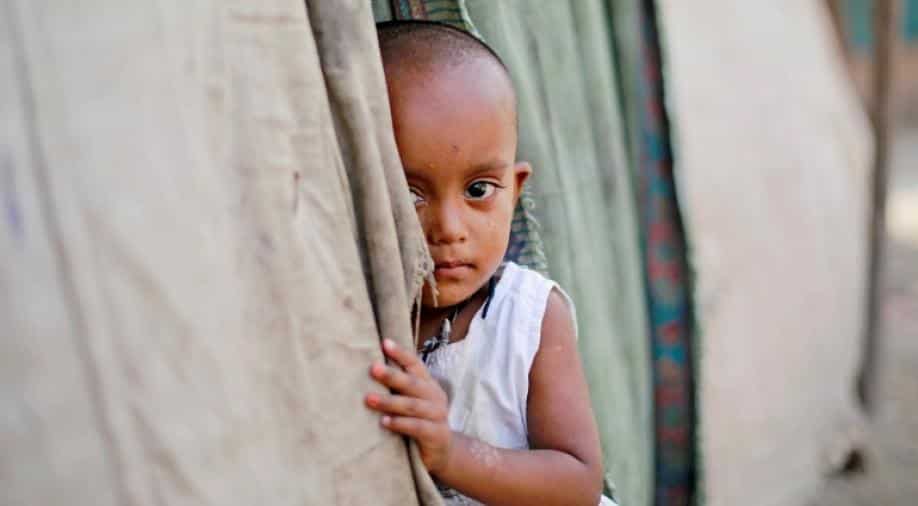 They burnt an effigy of the Centre alleging that it had failed to evict these unlawful foreigners and raised slogans 'Chodho Hamara Jammu Pradesh, Rohingyas Jaao Bangladesh' and 'Rohingyas, Bangladeshis go back'.

Led by Jammu and Kashmir National Panthers Party (JKNPP) chairman and former minister Harsh Dev Singh, over a dozen party activists assembled at the Exhibition ground and held a demonstration to press for early deportation of the foreign immigrants.

They burnt an effigy of the Centre alleging that it had failed to evict these unlawful foreigners and raised slogans 'Chodho Hamara Jammu Pradesh, Rohingyas Jaao Bangladesh' and 'Rohingyas, Bangladeshis go back'.

The natives of Myanmar and Bangladesh have already been identified in Jammu city and its adjacent areas, and as such they should be immediately deported from Jammu and Kashmir, Singh said.

"Don't pass statements, just act... Do not test the patience of the nationalist Dogras. Deport them (Rohingyas and Bangladeshis) otherwise the nasty situation could lead to devastating socio-political conflict between the hosts and the unlawful foreigners, the JKNPP leader warned.

Claiming that the people were sick of the stereotype statements issued by Central leaders for mere media consumption, Singh alleged that while the Rohingyas and Bangladeshis were settled in Jammu during the Congress-National Conference rule, the BJP had been hand in glove with its erstwhile ally PDP in providing them all kinds of civic amenities to settle them in and around the city under a deep-rooted conspiracy to reduce Dogras to minority.

They had illegally built slums at some of the congested colonies in Jammu city and managed to procure permanent resident certificates, Aadhaar cards, ration cards, free water and electric connections, besides admissions of their children in government schools, he claimed.

Singh said despite proven "criminal antecedents" of Rohingyas, the Centre and the governor administration were not taking cognisance of the alarming situation which could explode and flare up tension in the entire Jammu province.

With the illegal settlement of these foreign immigrants, not only the demography of Jammu city and its peripheral areas are under threat but they had become a hub of serious crimes, he alleged.

The JKNPP leader claimed that the illegal immigrants described as "ticking time bombs" by the intelligentsia had been found active in fuelling narco-smuggling, human trafficking, child abductions, beggary, border crossing and other crimes.

Besides, they enjoy the patronage of various radical terror outfits active in the valley, he alleged.