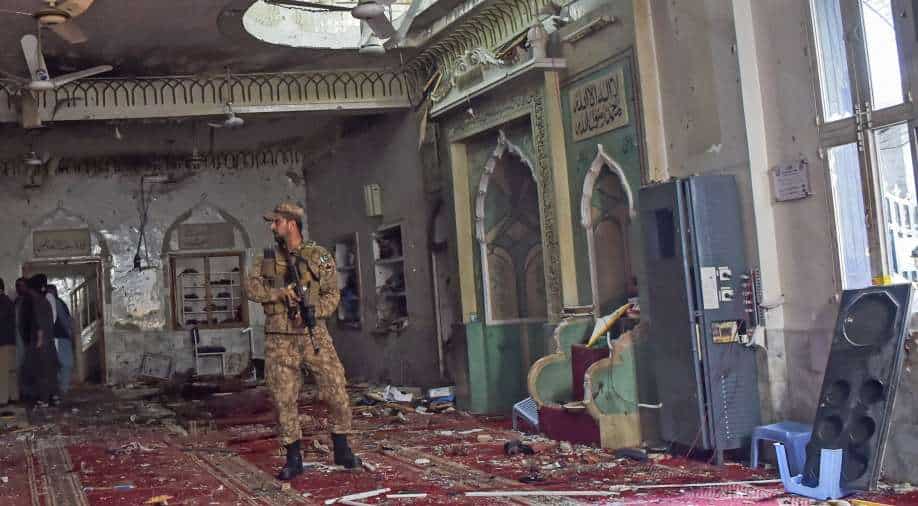 A soldier stands guard inside a mosque after a bomb blast in Peshawar Photograph:( AFP )

The suicide blast occurred around 190 kilometres (120 miles) to the east of Rawalpindi where Australia and Pakistan are playing their first Test cricket match.

The Islamic State has claimed responsibility for the explosion at a Shiite mosque in Peshawar city of Pakistan that killed at least 57 people and injured more than 200.

The suicide blast occurred around 190 kilometres (120 miles) to the east of Rawalpindi where Australia and Pakistan are playing the first Test cricket match.

The explosion took place on Friday after two terrorists opened fire at police officers near Peshawar.

After that, one of them entered the building and staged the explosion.

The explosion happened at a time when worshipers had gathered at the Kucha Risaldar mosque to offer Friday prayers, according to the Dawn newspaper.

The injured were rushed to the Lady Reading Hospital.

In a statement, advisor to Khyber Pakhtunkhwa chief minister Muhammad Ali Saif said that the terrorists first tried to enter the mosque and exchanged fire with the police.

UN Secretary-General Antonio Guterres on Friday condemned the suicide blast, saying "houses of worship should be havens, not targets".

Peshawar is just 50 kilometres from the porous border with Afghanistan. It was a frequent target of militants in the early 2010s but security has greatly improved in recent years.

The deadly suicide bombing comes at a time when cricketing nations have been reluctant to send their teams to Pakistan over security concerns, ever since the Sri Lankan team was attacked in 2009.