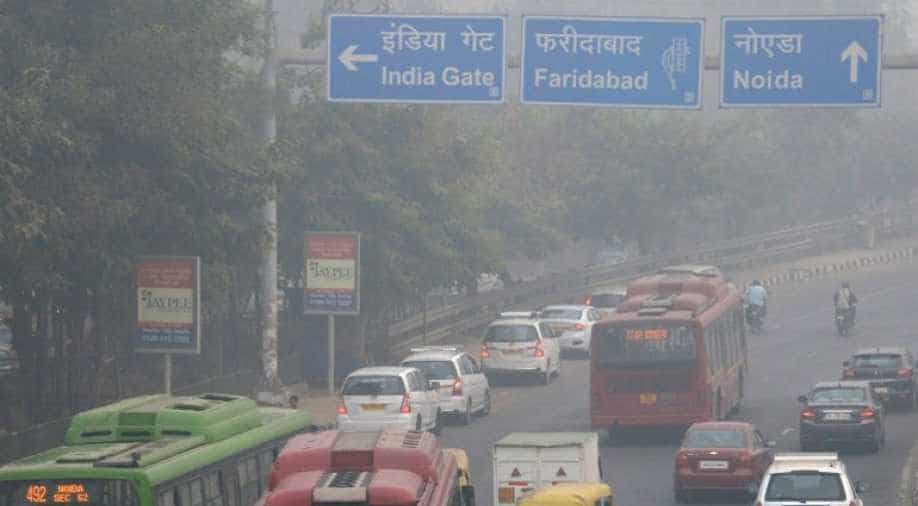 Commuters navigate through a major road engulfed in smog in New Delhi on November 7. Photograph:( AFP )

India's top court on Tuesday gave the federal government 48 hours to come up with a disaster management plan to deal with the alarming levels of air polution in the national capital.

Taking into account the alleged "differences" between the federal and the state government on the matter, the Supreme Court asked the them to to devise a "common minimum programme" for taking steps to deal with the menace, India's news agency PTI reported.

"We want to know whether you (Centre) have any disaster management plan. Do you have a policy which deals with graded responses to the situation and provides what action would be taken at which stage?
"What is the protocol? Now the time has come where we need to have this," a bench comprising Chief Justice T S Thakur and Justices A K Sikri and S A Bobde said.

The government on Tuesday asked the court for two days to come up with a plan, which was granted.

"Give me two days. We will have a meeting with the environment secretary and come up with a comprehensive response to the problem of Delhi pollution," India's solicitor general, Ranjit Kumar, told the court.

An environmental body filed a petition with the Supreme Court earlier this week demanding urgent steps to tackle the "public health emergency" in the national capital.

Sunita Narain of the Supreme Court-appointed pollution watchdog, Environment Pollution Control Authority (EPCA) had urged for an urgent hearing on the matter. The EPCA submitted that air pollution levels in the country had reached alarming proportions, and that the PM 2.5 level on November 5 was 837.7 ug/m3 in Delhi, almost 14.4 times higher than the limit of 60 ug/m3.

The apex court took the governments of Delhi, Haryana and Uttar Pradesh to task for not regulating the incoming trucks and heavy vehicles which used Delhi as a transit point.

"How do you regulate this? Do you ask vehicle drivers as to where they are going? What are the training given to policemen or toll operators," the bench asked. "What establishment have you (states) set up for diversion of traffic before they enter Delhi?"

The court also asked the government to follow a graded approach to tackle the problem and specify the steps to be taken at each "level" of the escalation of the problem.

Delhi government advocate Indira Singh also informed the court that the government had acquired six vacume cleaning vehicles to counter pollution and was planning to purchase 16 such vehicles.

Hearing in the matter will continue on November 11.

In a separate hearing in India's environment court on Tuesday, Judge Swantanter Kumar slammed authorities of Delhi and four of its neighbouring states for not taking action sooner to control alarming levels of pollution.

The bench said, "When all this mess was going on and Particulate Matter (PM) 2.5 pollution went up above 1000, what actual steps did you take on the ground except doing meetings? See what kind of joke you people play. You ask people who fix lights on the streets to sprinkle water with cranes to control dust pollution. Why could you not deploy helicopters to sprinkle water all over NCT Delhi?

"Is it beyond imagination? Even by common sense, only water can bring down the PM levels and improve air quality. It is shocking that for the first five days nobody did anything, be it the states or the Centre. Everybody was watching and waiting for the smog to intensify.

As an interim measure, the green tribunal banned all construction work in Delhi and NCR for the next 7 days to bring the smog under control and ordered halting operations of stone crushers and brick kilns in Delhi and NCR.

The EPCA said the reason for Delhi's high pollution levels are large numbers of vehicles, unchecked construction and road dust, garbage burning, burning of crackers on the festival of Diwali and the burning of paddy residue by farmers in neighbouring states of Punjab and Haryana. The following priority action plans were recommended by EPCA in its report to the court.