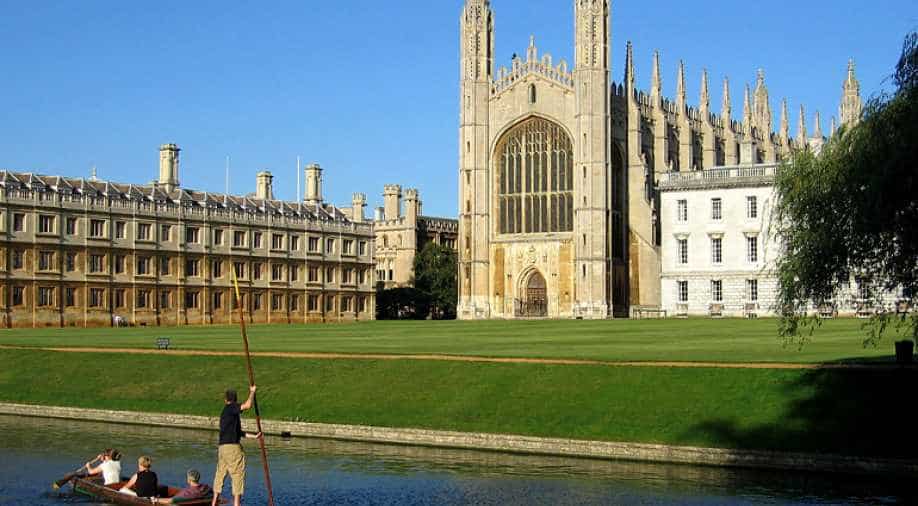 King's College Chapel at Cambridge University, which is one of the top two universities in the world in terms of research. Image source: Wikipedia via Andrew Dunn. Photograph:( Others )

Researchers said that unsuitable research infrastructure, inappropriate funding, lesser incentives for research are some reasons behind India's poor performance ||An Indian professor said there is a national initiative to set up 10 'world-class' universities

All the central universities in India put together have a lesser research output than either of the world's top two ranking varsities - Cambridge and Stanford, according to a latest study that paints a dismal picture of the state of scientific research in the country.

Researchers said that unsuitable research infrastructure, inappropriate funding, lesser incentives for research are some of the reasons behind the poor performance of the Indian institutions.

Scientists evaluated the research performance of 39 central universities in India on various parametrise including total publications, total citations and number of publications with international collaborators.

They compared the parameters with that of the two top ranking world universities, namely University of Cambridge in the UK and Stanford University in the US.

"Recently there have been exercises on national ranking of institutions and also proposals and draft bills for setting up 10 world class universities in India," Vivek Kumar Singh, from Banaras Hindu University (BHU) in Uttar Pradesh told PTI.

"In this regard, we were interested in identifying how are our centrally funded universities doing in terms of research, which is an important characteristic of a world class university," Singh said.

"There are a number of reasons for poor performance of Indian institutions in research," Singh said. "In our opinion, unsuitable research infrastructure, inappropriate funding, highly bureaucratic systems of research funding, incompetent faculty members, lesser incentives for research and poor administrative structures of Indian institutions are just a few," he said.

Since no proper analytical evaluation is available for a large number of institutions, the researchers wanted to perform a quantitative evaluation of research performance of Indian institutions.

Researchers, including Marisha from BHU and Sumit Kumar Banshal from South Asian University in New Delhi, found that the University of Delhi has the highest research output at present, followed by BHU.

Some smaller institutions such as Hemwati Nandan Bahuguna Central University Garhwal and University of Hyderabad show better ranking for the highest number of citations per faculty.

"Indian institutions are not well represented in international rankings, with just a few institutions able to make it to the list," he said. "University of Delhi does fairly well on most of the indicators. To be more specific, it ranks number one on six out of the seven indicators that have been used in this study," said Singh.

University of Delhi accounts for approximately 21 per cent of research output of all 39 Central Universities during 2010-14, researchers said.

The highest number of research papers has been published in the field of basic sciences - Physics, Chemistry and Biology, researchers said. The trend has not changed in over two decades, they said.

"Over 35 per cent of the research work in all disciplines has been done during the last five years only which is also indicative of the fact that research activity has been on a rise since past few years," said Singh.

Last year, a report found that India is at the second position among countries with the highest increase in their contribution to high-quality scientific research. The country's growth of research is only behind China's.

The study will be published in the journal Current Science.