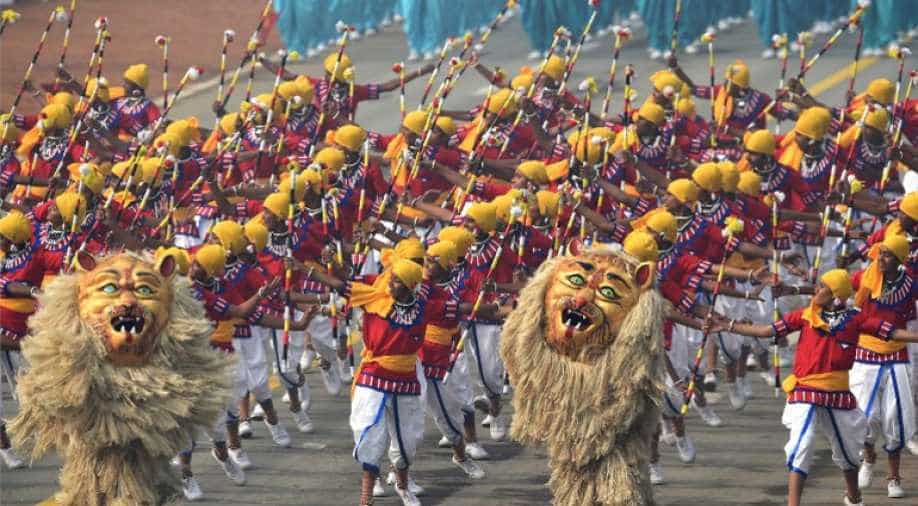 States like Arunachal Pradesh, Tripura, Karnataka and Tamil Nadu will be presenting traditional dances along with their tableaux. (Representative image) Photograph:( AFP )

As India is set to celebrate its 68th Republic Day today, the nation will show its vibrant cultural colours.

This year, the 68th Republic Day parade will see an amalgamation of varied themes in a tribute to the nation's journey so far and big since it first became a republic.

The participating tableaux will essay themes which include "Green India- Clean India", "Beti Bacho Beti Padhao", "Skill India", a tribute to Lokmanya Tilak on his 160th birth anniversary, art and lifestyle of Kutch, model government schools of Delhi and several others.

Delhi is returning after three years. Its tableaux will showcase a model government school; highlight how the recent government initiatives have transformed the state-managed schools.

While Arunachal Pradesh's Yal dance and Tripura's tribal dance "Hojagiri" will entertain the guests, Karnataka will display its folk dance and Tamil Nadu will showcase its "Karakattam" dance.

The Punjab tableau will feature the "Jago Aiya" dance which is a popular dance form that takes place one night before a Punjabi wedding.

Lakshadweep will be participating after 23 years and will portray itself as an unexplored destination for "adventure sport-nature tourism".

Whereas, the Haryana tableau will be based on the popular "Beti Bachao Beti Padhao" campaign.

The cultural performances include choreographed folk / tribal dances and music from across the country arranged through the North Zonal Cultural Centre as well as performances by cultural troupes from the different states/ Union Territories of the country.