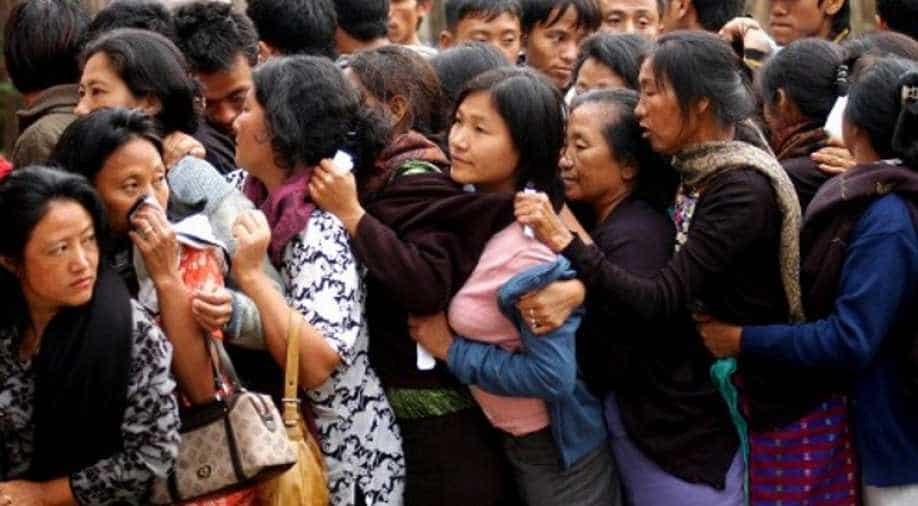 Powerful tribal groups are reportedly against 33 per cent reservation for women in the municipal bodies. Photograph:( AFP )

The chief minister of India's Northeastern state of Nagaland, T R Zeliang, has rejected the demand for his government's resignation following the death of two persons in anti-Urban Local Body poll agitation in Dimapur and appealed to the people to stop violence and not fall prey to rumour mongers.

Curfew remains imposed in the city of Dimapur after clash between police and mob over local body elections.

"Making unreasonable and unconstitutional demands such as asking the entire Cabinet to tender resignation when the ministry has undisputed, unquestionable majority and support of the entire Assembly, is simply unacceptable and non-negotiable," the chief minister's office said in a statement.

Violent mobs on Thursday went on a rampage in the state's capital Kohima to vent their anger against ongoing elections to urban local bodies, vandalising and setting government offices and vehicles on fire, prompting the deployment of five columns of the army to bring the situation under control.

The Regional Transport office and that of the Excise Department were also set ablaze by violent mobs demanding the resignation of chief minister T R Zeliang and his entire cabinet for going ahead with the ULB polls despite opposition from powerful tribal groups that are against 33 per cent reservation for women in the municipal bodies, sources said.

A curfew came into effect from 9:30 pm on Thursday and would continue till further order, a notification said.

The statement said the MLA of Northern Angami Constituency Neiphrezo Keditsu was forced to tender his resignation as the chairman of Nagaland State Mineral Development Corporation on moral ground as one of the two persons killed in Dimapur happens to be from his own village.