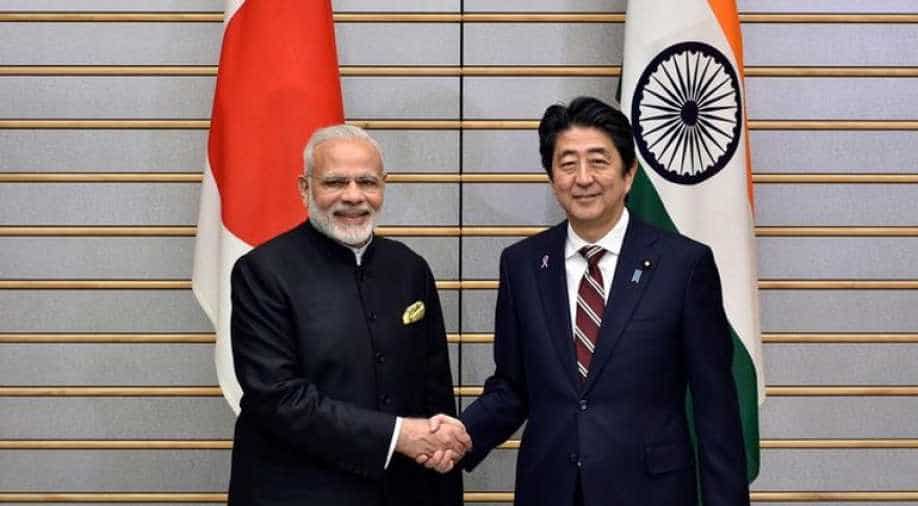 Narendra Modi and Shinzo Abe at their meeting in Tokyo, Japan on November 11. Photograph:( Reuters )

Japan and India today signed a landmark civil nuclear deal, paving the way for Tokyo to export nuclear technology and reactors to New Delhi for peaceful purposes. The agreement, which provides for bilateral cooperation in the field of nuclear energy, will enable the development of nuclear power projects in India.

It is the first time that Japan has concluded such a pact with a country that is not signatory to the Nuclear Non-proliferation Treaty (NPT). India has not signed the NPT since it feels it is discriminatory.

PM Modi, who is on a three-day visit to the country, called it the deal a "historic step in our engagement to build a clean energy partnership" and said it would help the two countries to combat climate change.

The nuclear agreement will also enable US-based players with Japanese investments including Westinghouse Electric Corporation and GE Energy Inc to set up atomic plants in India.

India, which seeks to increase its nuclear capacity more than ten times by 2032, is in advanced negotiations with Westinghouse Electric --- owned by Japan's Toshiba Corp ---- to build six nuclear reactors in southern India.

At the same time, Japanese nuclear plant makers such as Toshiba and Mitsubishi Heavy Industries Ltd are looking for overseas markets after the 2011 Fukushima nuclear disaster decreased domestic demand for new nuclear plants.

The accord stipulates nuclear fuel and equipment provided can only be used for peaceful purposes, and a separate document signed alongside the nuclear agreement has a clause allowing Japan to terminate the pact if India conducts a nuclear test.

"This agreement is a legal framework that India will act responsibly in peaceful uses of nuclear energy and also in Non-Proliferation regime even though India is not a participant or signatory of NPT," Shinzo Abe said at a joint press interaction with Modi.

The agreement with Japan is similar to the 2008 agreement with the US which gave India access to nuclear technology after decades of isolation, Reuters reported.

The two leaders also discussed the South China Sea issue and agreed on the need for respecting freedom of navigation and overflight in tune with the principles of United Nations Convention on the Law of the Sea (UNCLOS).

Other nations who have previously signed civil nuclear deal with India include the US, Russia, South Korea, Mangolia, France, Namibia, Argentina, Canada, Kazakhstan and Australia.