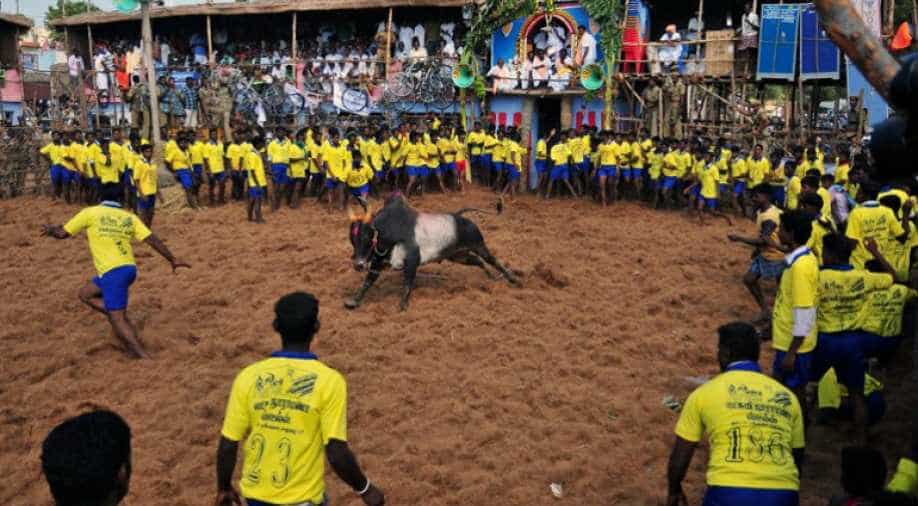 Amid protests against the ban on Jallikattu, police today detained several people at various places in some southern districts for attempting to organise the bull-taming sport.

Police said youths were detained at Mudakathan, Alanganallur, Palamedu and Vilangudi in Madurai district, at Nallampatti in Dindigul district and Pottuchavadi in Thanjavur district of Tamil Nadu for trying to hold the sport defying the apex court ban.

People hoisted black flags at Palamedu village for not allowing them to hold Jallikattu in connection with Pongal festivities and local temple functions, they said. Shops at several localities remained closed and black flags were also hoisted at Alanganallur.

Both Palamedu and Alanganallur are famous for Jallikattu in Madurai district.

A police officer said they were maintaining strict vigil in such localities. Police stations have been alerted to prevent any attempt to hold Jallikattu, the officer added.

The die-hard supporters of the sport along with major political parties in the state have been demanding an ordinance for conducting Jallikattu after the Supreme Court imposed a ban on it. Yesterday, 149 persons were detained in Madurai district for staging protests against the ban.

The Supreme Court on Thursday had said it could not give its verdict on Jallikattu before Pongal.

DMK Working President MK Stalin had led a protest in Chennai on Friday in this regard.

Meanwhile, "Mattu Pongal", the third day of Pongal festivities where people offer prayers to the bulls, cows and other farm animals, was celebrated with fervour and special poojas were performed to some temple bulls at Palamedu.

After offering to the local deity, pongal (sweet rice made of jaggery with rice and milk, in a traditional mud pot) was fed to the bulls, some of which take part in the bull taming sport, by Jallikattu supporters.

Police had been posted in large numbers in Palamedu village to prevent untoward incidents. There was a flutter as some bulls were released on the road and some youths raised slogans hailing Jallikattu.

Police said releasing bulls on the road was a common practice followed during the Mattu Pongal celebrations. Police refuted claims by some youths that the sport had been held defying the apex court ban. They said attempts to conduct the sport were foiled and some persons detained.