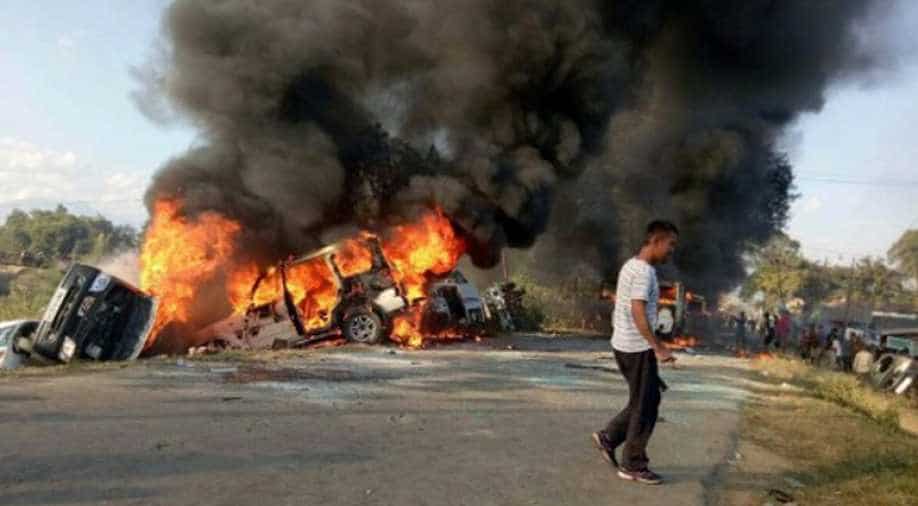 Vehicles are seen burning after being set alight by protesters in Imphal, the capital of India?s northeastern state of Manipur, on December 18, 2016. Photograph:( AFP )

India's interior minister Rajnath Singh on Thursday shot off a sternly-worded letter to Okram Ibobi Singh, chief minister of northeastern frontier state, Manipur, on the continuing economic blockade on two National Highways that is causing acute shortage of essential goods in the state.

The letter said the state government had "failed to keep the National Highway 2 open" inspite of the Indian central government's "repeated requests" and the provision of "central forces to assist local forces". He also reminded the Manipur chief minister that the state government has to "display the will" to end the blockade and "take leadership".

Singh stressed upon the fact that law and order fell within the state government's ambit of power and reiterated that the national government "can only assist" it "in case such assistance is required and asked for".

Rajnath Singh further said that the Indian interior ministry had responded to the state government's request seeking central forces and had made available 30 companies comprising about 3,000 personnel.

"Indeed, when the State Government did move two convoys along the National Highway-2, on 2nd December (244 vehicles) and on 8th December (314 vehicles), Central Forces assisted the movement of this convoy which enabled some essential supplies to reach Manipur," Rajnath Singh wrote. He, however, added that there had been no initiative from the state government to "either ensure that the NH-2 is kept open or that at least movement of convoys is made, in spite of availability of the additional forces" despite interior ministry officials being in constant touch with the state government.

The interior minister also cited the visit by special secretary (internal security) on December 14-15; a message sent on December 19 to the state director general of police assuring the state government of the central government's commitment to supporting it in opening National Highway 2; and, follow-up telephone calls by special secretary (internal security) and a joint secretary as instances of the Centre's proactive approach. "However, there has been no response, or action, by the State Government," Rajnath Singh stated.

The interior minister urged the Manipur CM to ensure supply of commodities to the state through NH-2 "rationally using the assistance of the Central Forces, as necessary".

Rajnath Singh asked the Manipur CM to discharge these constitutional obligations with utmost promptness "for the sake of people of Manipur".

In another letter to Nagaland chief minister TR Zeliang, Rajnath Singh said even as the central government was trying to persuade the Manipur government to keep NH-2 open, there have been report of the Naga Students Federation (NSF) calling for blockage of vehicles even in the portion of NH-2 that passes through Nagaland. He requested the Nagaland chief minister to ensure that there is no disturbance of movement of vehicles going through Nagaland so that supplies can pass safely through that state.