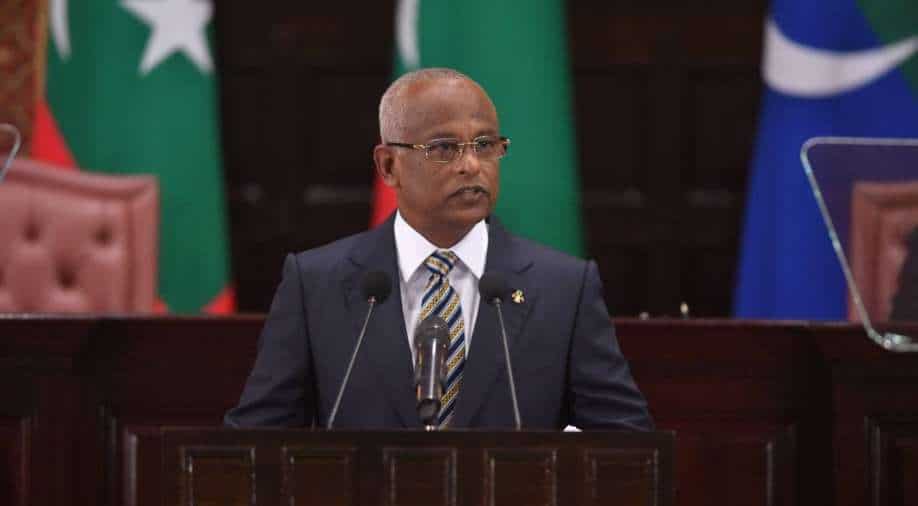 The president in his speech announced that in December the country repaid the $250 million swap facility taken from India's central bank, the RBI. The facility was taken in July 2019 to help manage the state's reserve

Delivering his address at the opening session of the Maldives Parliament, President Ibrahim Mohamed Solih highlighted India's role in the country's development.

Recalling India’s help in the development of Addu city, the president said, "Currently, with the line of credit provided by India’s Exim Bank, roadwork is being carried out to rectify the flooding problem in the city,” while pointing out that the city's development is “crucial for the development of the rest of the country.”

Addu is the second-largest urban area in the Maldives.

Last year, India's Afcons engineering company and the Maldives had signed a $500 million infrastructure project for the construction of the Greater Male connectivity Project (GMCP).

The president in his speech announced that in December the country repaid the $250 million swap facility taken from India's central bank, the RBI. The facility was taken in July 2019 to help manage the state's reserve.

Speaking on housing, which has been the key focus of the government, President Solih said, “A total of 2,180 houses are being built to provide housing within the atolls. Through the ‘Gedhoruveriyaa’ loan scheme, 82 individuals will receive over MVR 42 million."

The president expressed optimism on the installation of solar units in thousand of homes before the end of the year under the solar programme.

He also mentioned the use of Dornier aircraft during “multiple operations” taken by the Maldives military, saying that the country's coast guard “provided emergency assistance to a total of 531 people in 364 incidents at sea, and transported 2,199 emergency patients without any consideration to weather conditions.”

India has given Dornier aircraft to the country, the discussion for which started in 2016. Most of these Dorniers given to the Maldives National Defence Force have been engaged in humanitarian efforts and EEZ surveillance.

He extended gratitude to India, China, Japan, USA, UAE, Saudi Arabia, Kuwait, Pakistan, Sri Lanka, Bangladesh and the EU, and other friendly nations for all the “development assistance extended to the Maldives”.

The address was delivered in accordance with Section 84 of the Maldives Constitution at the start of the first session of Parliament that started on Thursday.

During his address, he gave an overview of the state of the country and his plans for its improvement.

On Maldives role in the region, he said, “The Maldives continues to play an important in ensuring the peace and safety of the Indian Ocean in close cooperation with its neighbours.”

One of his key announcements during the address was a nationwide campaign called the “National Moderation Campaign” to combat extremist ideologies. The campaign will commence this year.