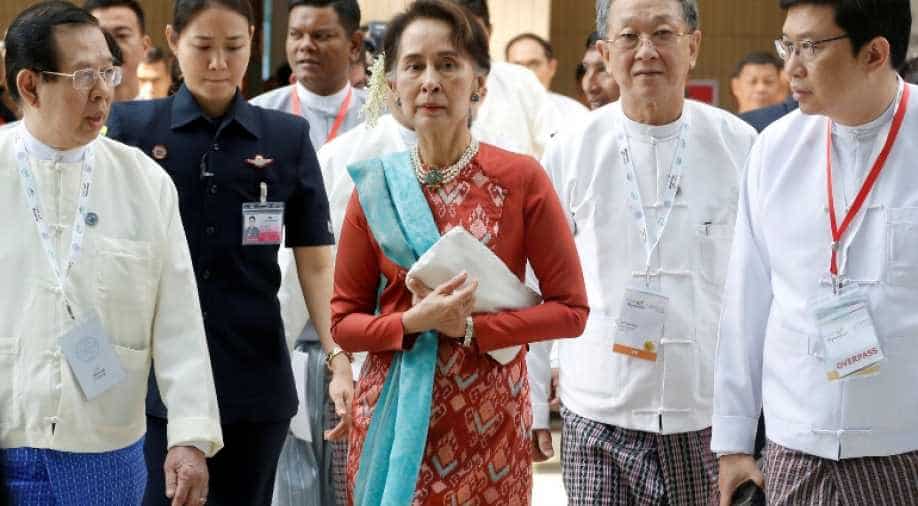 'Now that ethnic parties have allied with one another and prepared, we can't fully rely on the power of the party. We must try harder than before to win the trust of the people,' said Dashi La Seng, an NLD lawmaker from the northern state of Kachin.

New political groups are emerging to contest Myanmar's next election in 2020, aiming to challenge the hegemony of national civilian leader Aung San Suu Kyi after she has been weakened by escalating ethnic conflicts and slowing economic growth.

Those factors were blamed by party officials for the poor performance of Suu Kyi's National League for Democracy (NLD) in by-elections in November when it won only seven of the 13 seats up for grabs as regional and army-linked parties made gains.

"Now that ethnic parties have allied with one another and prepared, we can't fully rely on the power of the party. We must try harder than before to win the trust of the people," said Dashi La Seng, an NLD lawmaker from the northern state of Kachin, where the party lost a seat in November.

At stake is the future of Myanmar's transition to democracy. The NLD swept to power in a landslide in 2015, winning a comfortable majority in parliament despite 25 per cent of the seats being reserved for the army.

While the NLD is still expected to do better than other parties in 2020, its majority could suffer severe losses, say analysts.

"It's questionable whether the NLD will win enough seats to form the government. If they don't, they'll have to form a coalition or negotiate with other parties," said Ye Myo Hein, an analyst at the Tagaung Institute of Political Studies.

Suu Kyi has responded to recent setbacks with a flurry of activity.

The Nobel laureate has faced criticism from ethnic leaders that her government is high-handed and lacks understanding of the political demands of the country's myriad minorities, while investors have long complained about the slow pace of reform.

In the space of one week in January the Nobel laureate - often seen as aloof in style - popped into a school in a Muslim neighbourhood of Yangon and launched an investment conference in the commercial capital touting the country's plentiful resources and youthful population, while her party floated changes to the military-drafted constitution.

The burst of activity was interpreted as an attempt by Suu Kyi to more actively push the government's message to constituents and investors. But rivals have been busy, too.

Shwe Mann was ousted as the head of the army-linked Union Solidarity and Development Party in 2015 and has surrounded himself with moderates from the previous regime.

Ko Ko Gyi, one of the legendary leaders of the student protests in 1988 against junta rule, has also started a party called the People's Party. He has tempted other groups, including ethnic parties, to launch a joint bid for power.

"Even if one party can't win, we can combine in parliament as an alliance. We can stand as one and avoid having our votes split," said Ko Ko Gyi.

Nowhere are the headaches for the NLD bigger than in the western state of Rakhine, where it is dealing with the fallout from an army offensive that in 2017 forced around 730,000 Rohingya Muslims to flee to Bangladesh.

The European Union is considering trade sanctions on the country over the crisis, potentially stripping it of tariff-free access to the world's largest trading bloc.

The measures could include Myanmar's lucrative textile industry and potentially put hundreds of thousands of jobs at risk - many in the areas that overwhelmingly voted NLD in 2015, such as Yangon and Mandalay.

Suu Kyi is also facing a fresh threat from the Arakan Army, a Rakhine rebel group that wants greater autonomy for the state, where the mainly Buddhist Rakhine ethnic group makes up the majority.

The International Crisis Group said in a report from January that the fighting signified "a dangerous shift from politics to the insurgency as the means of addressing ethnic Rakhine grievances".

The Rakhine ethnic party, Arakan National Party, had a strong showing in the 2015 polls, but it has been denied major roles in the local administration, fuelling resentment against the NLD government in the state.

Oo Aung Than, who runs Thazin Community Development Institute, an organization that works on equal rights and development in Rakhine, has complained that the NLD ignored the political will of the Rakhine people in 2015.

"We, ethnic people, can see how they value ethnic people," said Oo Aung Than. "The landslide victory will not happen again in 2020."