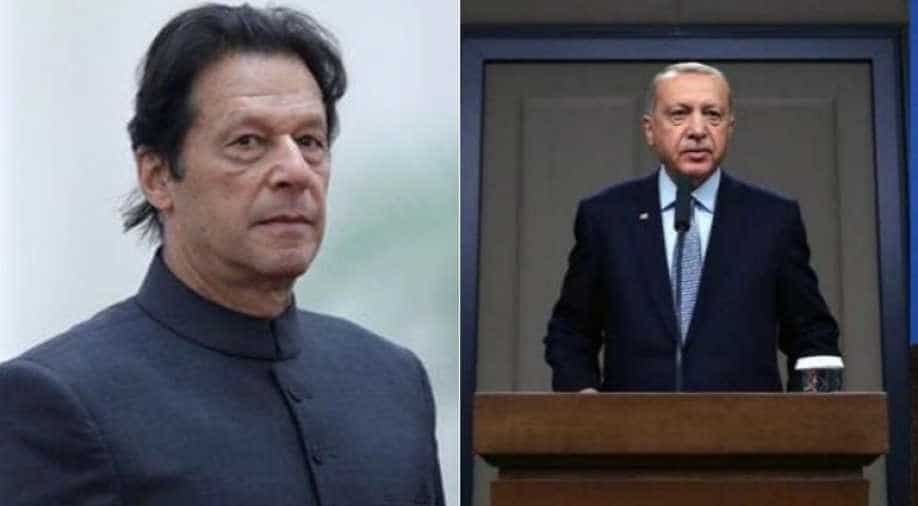 The duo accused Macron of Islamaphobia and supported the boycott of French goods.

There were scenes of violence, protesters desecrating the French flag and burning effigies of Emmanuel Macron as the radicals issued threats and in some cases, they have even justified Islamic terrorism.

Erdogan and Imran Khan only managed to amplify the outrage while adding to their growing list of problems. The fact remains both Erdogan and Imran Khan face several challenges at home. The Pakistan prime minister is struggling with the pandemic and the economic crisis. Islamabad has reportedly reached out to Beijing for another loan.

It wants $2.7 billion for a project that is part of the China-Pakistan economic corridor(CPEC) as of today Pakistan owes more money to China than it does to the International Monetary Fund(IMF). According to one claim, Islamabad has to pay back to Beijing a little more than $17 billion for CPEC alone which is around six per cent of Pakistan's GDP.

China is like a lender of last resort to Pakistan but Pakistan has borrowed from France as well.

From bilateral sources, France gave $25.3 million in loan, $52.3 million and the $13.4 million. In 2017, France helped out Pakistan with a loan of $25.3 million. A report in June this year claimed that Pakistan has received debt relief from the Paris club. It is an informal group of creditor nations which includes countries like United States, United Kingdom, Japan and France.

The Paris club creditors own $787 million next year, with Japan and France accounting for the bulk of the amount. According to the newspaper Dawn, Pakistan owes more than $780 million to the Paris club of creditors next year.

Most of the debt has to be paid back to Japan and France. The last time Islamabad took on a creditor it didn't end well. Earlier this year, Pakistan had to pay a hefty price for starting a diplomatic fight when Islamabad issued an ultimatum to Saudi Arabia over Kashmir.

Riyadh demanded repayment from the Imran Khan government and Pakistan had to pay back Saudi Arabia. Imran Khan should take lessons from the past. Diplomatic fights can prove to be very costly for Pakistan.

Erdogan has his own share of challenges. A few weeks ago, the Turkish lira hit a record low against the dollar. The currency lost 46 per cent of its dollar value leading to the shock resignation of Berat Albayrak, the son-in-law of the Turkish president who served as the finance minister.

Abayrak reportedly had a feud with the new central-bank governor, Naci Agbal. Erdogan's troubles don't end there, he has pushed Turkey into many diplomatic fights. As of today, Turkey is caught in various degrees of confrontations with Greece, Syria, Israel, Cyprus, Armenia, Egypt and France.

Erdogan's attacks against France could have made matters worse for Turkey. The European Union is mulling sanctions. The European Commission has already drawn up a list of potential targets for economic sanctions which could deal a blow to Turkey's tourism and transport sectors, European diplomats told AFP.

The European Commission which is the executive branch of the union has reportedly drawn up a list of potential targets for economic sanctions against Turkey.

Experts often say when leaders struggle at home, they find an enemy abroad, if Erdogan and Imran Khan were trying out this strategy it clearly has not worked for them.