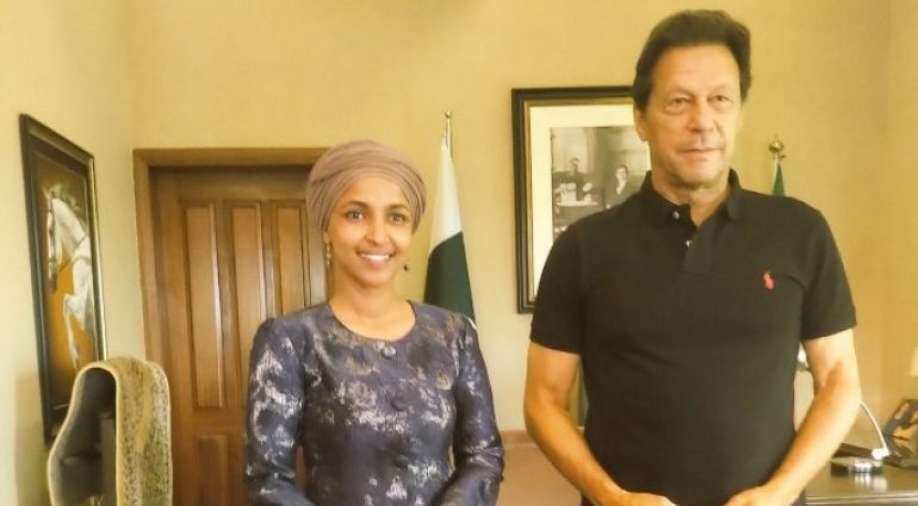 Imran Khan, Pakistan's prime minister, has claimed that the US has an official document to dethrone him in order to repair relations between the two countries.

Ilhan Omar, the first Muslim woman elected to Congress in the United States, visited former Pakistan Prime Minister Imran Khan at his Bani Gala home and thanked him for speaking out against Islamophobia.

Shireen Mazari, a former human rights minister in Imran Khan's Pakistan-e-Tehreek (PTI), posted a snapshot of the meeting on Twitter, writing that both sides discussed matters of common interest.

Taking to Twitter, she wrote, "US Congresswoman Ilhan Omar called on Chairman PTI in Bani Gala. They discussed Islamophobia and related issues. @Ilhan expressed her admiration for @ImranKhanPTI and his position on and work against Islamophobia globally. IK appreciated her courageous and principled position on issues. "

Khan had earlier claimed to have been in possession of a threat letter, and alleged that a conspiracy was hatched by the US to remove him from office.

The US rejected claims of any specific message being delivered to Pakistan's then-ambassador to the US, claiming that no US government agency had written a letter to Pakistan about the country's current political circumstances.

According to The News International, Ilhan Abdullah Omar arrived in Islamabad earlier on Wednesday, where he was met at the Islamabad Airport by Foreign Office Director-General Americas Mohammad Mudassir Tipu.

She would also visit Pakistan-occupied Kashmir during her stay in Pakistan. Omar, 37, is a member of the Democratic Party and represents Minnesota in Congress. She is one of two Muslim women elected to Congress in the United States in 2018.