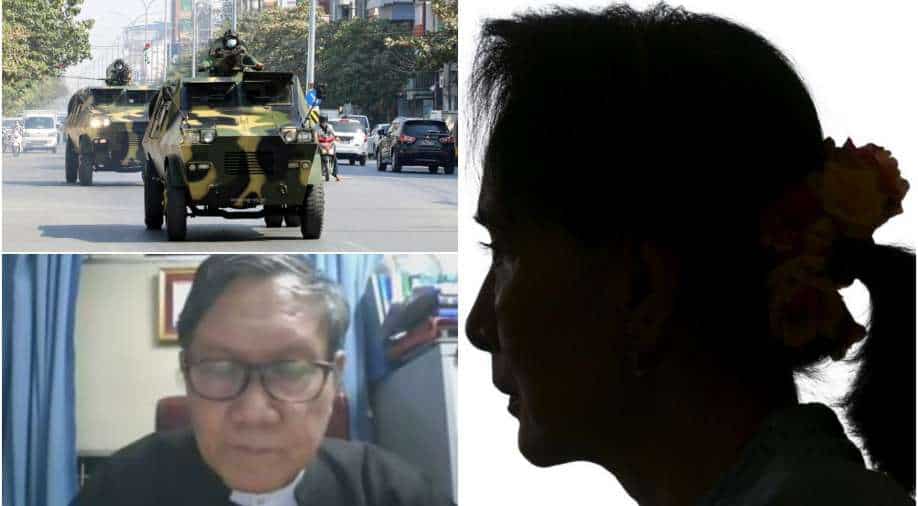 She, however, appeared at a court hearing via video conferencing this week and looked in good health. Suu Kyi's attorney, Khin Maung Zaw, hasn't seen her though. He has heard her speak to the presiding judge, and says she sounds fine.

In an exclusive conversation with WION on Thursday, Zaw said he hopes Suu Kyi gets a fair trial.

"We haven't been able to speak with her. But we were allowed to listen -- only listen -- to her conversation with the presiding judge. By her voice, she seemed to be in good health. She did not seem depressed," he said.

Zaw has still not been designated as Suu Kyi's defence attorney as the court has not permitted him. "We have still not been able to look at the documents and know of the reasons for which she was arrested. We are seeking permission," he said.

Also read | ‘She is a hero’: In Myanmar’s protests, women are on the front lines

Zaw added, "It's not normal for someone to not have a defence attorney one month into a trial. As a lawyer, I do have faith in my country's judiciary. But in this case, I have a doubt. I just hope she gets a fair trial.

The military has justified the coup by saying its complaints of voter fraud in the November 8 vote were ignored. Suu Kyi's party won by a landslide, earning a second term. The election commission said the vote was fair.

"The entire world knows the election fraud is just a pretext to stage the military coup," Zaw told WION.

Zaw also refuted any possibility of a foreign tribunal interfering in the matter. He said, "That may be very difficult to establish. The military here is very adamant. It is pretending to be patriotic and nationalistic. It is not."

The attorney, in conversation with WION, also welcomed requests from Myanmar's neighbouring countries and the West to release Suu Kyi, but added, "reasonable requests are meant for reasonable minds."

The United Nations has placed trust in China and Russia to resolve the conflict in Myanmar. But Zaw begs to differ.

He said, "China and Russia have always stood by the military in the crisis. They used their veto power also at the UNSC. So for obvious reasons, I don't place my trust in China and Russia for the resolution of this crisis."

Zaw also called on the international community to undertake a direct action.

"The international community should think of sanctions. A direct action would be favourable in this case," he said.

When asked about his concern for his own safety as he spoke with foreign press, Zaw said, "Of course, I am worried for my safety. But as a lawyer, I have an ethical duty to stand up for truth and justice. I have been in jail for nine years. I am not concerned about that."

He added, "The young Myanmar -- the students and the intellectuals -- who have been protesting on the street for so many weeks are braver than me."

Myanmar has been in chaos since the army seized power and detained Suu Kyi and much of her party leadership on February 1.

The coup, which brought a halt to tentative steps towards democracy after nearly 50 years of military rule, has drawn hundreds of thousands onto the streets and the condemnation of Western countries.

At least 54 people have been killed and over 1,700 detained since Myanmar's February 1 coup, the UN rights chief said Thursday, demanding that the military halt its "vicious crackdown".

On Thursday, protesters hit the streets again in Yangon and Mandalay, the nation's two biggest cities, as well as other towns that have been hotspots for unrest. The junta has sought to hide its crackdown from the rest of the world, choking the internet and banning Facebook -- the most popular social media platform.