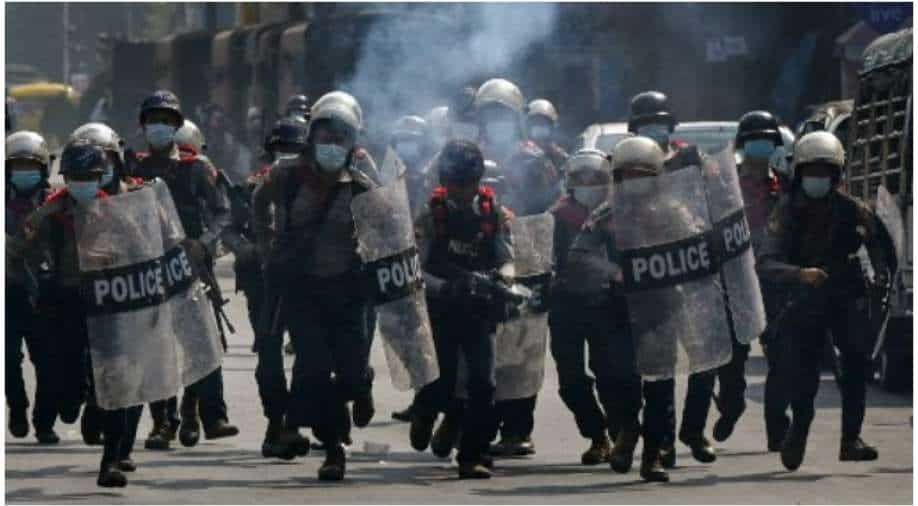 Police run while holding shields as they attempt to disperse protesters taking part in a demonstration against the military coup in Yangon on February 27, 2021 Photograph:( AFP )

All the men, who are lower-ranking policemen, were unarmed, the official said. “We are expecting more (people) to come,” he said, citing intelligence reports.

19 Myanmar police officers have crossed over the border into northeastern India to escape taking orders from a military junta that is trying to suppress protests against last month's coup, an Indian police official said on Thursday.

The men crossed into Champai and Serchhip, two districts in the northeastern state of Mizoram that share a porous border with Myanmar, the official said, declining to be named because of the sensitivity of the issue.

All the men, who are lower-ranking policemen, were unarmed, the official said. “We are expecting more (people) to come,” he said, citing intelligence reports.

India shares a 1,643-kilometre (1020-mile) land border with Myanmar, where at least 54 people have been killed since a February 1 coup.

The junta overthrew a democratically-elected government, and detained its leader, Aung San Suu Kyi, having disputed her party's landslide victory in November.

"We call on all countries to speak with one voice to condemn the brutal violence by the Burmese military against its own people," he said, referring to the country by its former name.

French President Emmanuel Macron called for an "immediate end of the repression in Myanmar".