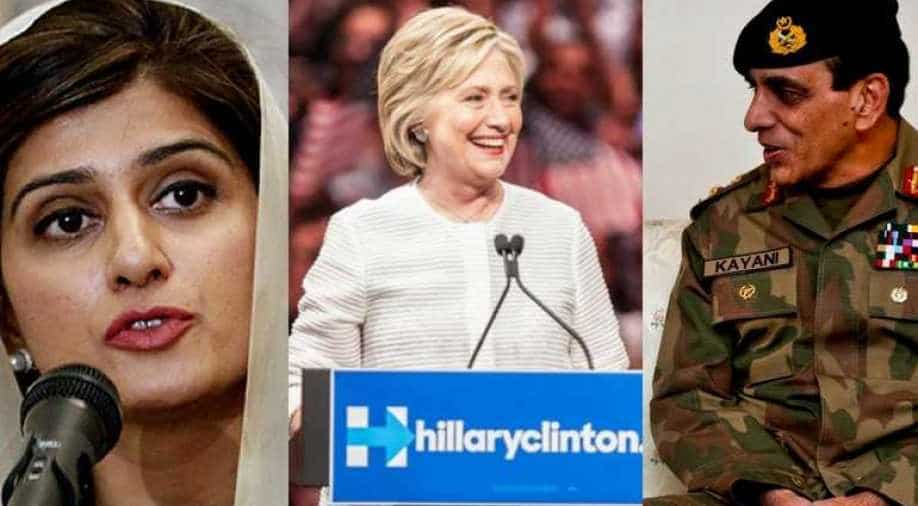 The mails clearly show what is known to the world for a long time. It's Rawalpindi that has been calling the shots and not Islamabad when it comes to Pakistan's foreign policy.  Photograph:(WION)
Follow Us

Former Pakistani foreign minister Heena Rabbani Khar was reportedly under pressure from the Pakistani Army not to attend a conference in Bonn on Afghanistan.

For a long time, India and many across the world have been saying that the Pakistan army that has been calling the shots in and not the civilian leadership. For the first time, documentary proof has shown, how Rawalpindi has been behind Pakistan's foreign policy.

Explosive revelations from Hillary Clinton's mails have shown how the Pakistani Army has been influencing Pakistani foreign policy.

Former Pakistani foreign minister Heena Rabbani Khar was reportedly under pressure from the Pakistani Army not to attend a conference in Bonn on Afghanistan.

"She said that during the defense committee meeting yesterday, the military had pressed hard for her to announce that she would not go to Bonn, but that she had been able to prevent that . But she was not sure she could sustain that argument in the days ahead.”

Ultimately, Pakistan withdrew from participation in the Bonn Conference due to a NATO airstrike in its territory on November 26, 2011 that resulted in the deaths of 26 Pakistani soldiers.

The emails confirmed how the military was responsible for Pakistan not participating in the Bonn conference.

“The Pakistani defence committee concluded its emergency meeting, called to discuss response to the November 27th Mohmand border incident. The MFA desk officer called to inform us of two decisions."

1st: Pakistan will not attend the Bonn conference

2nd: Foreign minister Khar urgently requests to speak with the secretary to explain that decision, as soon as possible. Khar is travelling by car to Lahore. Her cell phone number is... ”

The German ambassador in Pakistan had phoned the then Pakistan foreign minister and asked her to take part in the meet. The 5th December 2011 International Conference on Afghanistan was an important meet. Delegations from 85 states, 15 international organizations and the United Nations attended the conference.

The US did apologize for the 26 November 2011 incident that killed Pakistani soldiers. Secretary Clinton had called on foreign minister Khar and had said sorry.

Hillary said that the US is committed to working closely with "Pakistan and Afghanistan to prevent this from ever happening again”.

The foreign minister of Pakistan informed that ground supply lines into Afghanistan are opening and Islamabad won't charge any transit fee in the larger interest of peace and security in Afghanistan.

Closing ground supplies the been the best possible blackmailing technique of Islamabad to trouble US in Afghanistan.

The mails also show how Pakistan's permanent representative Maleeha Lodhi has been acting as conduit between the then secretary of state Hillary Clinton and the then Pakistani army chief Kayani.

In a mail it is written:

"I got a call from Maleeha Lodhi (former Pakistan Ambassador to US and UK) who is in London. She gave a message from Kayani."

The Pakistani foreign minister Khar had even messaged the then secretary of state Hillary Clinton after Malala was shot. Khar had appreciated Clinton’s strong statement regarding Malala Yousafzai.

The mails clearly show what is known to the world for a long time. It's Rawalpindi that has been calling the shots and not Islamabad when it comes to Pakistan's foreign policy.