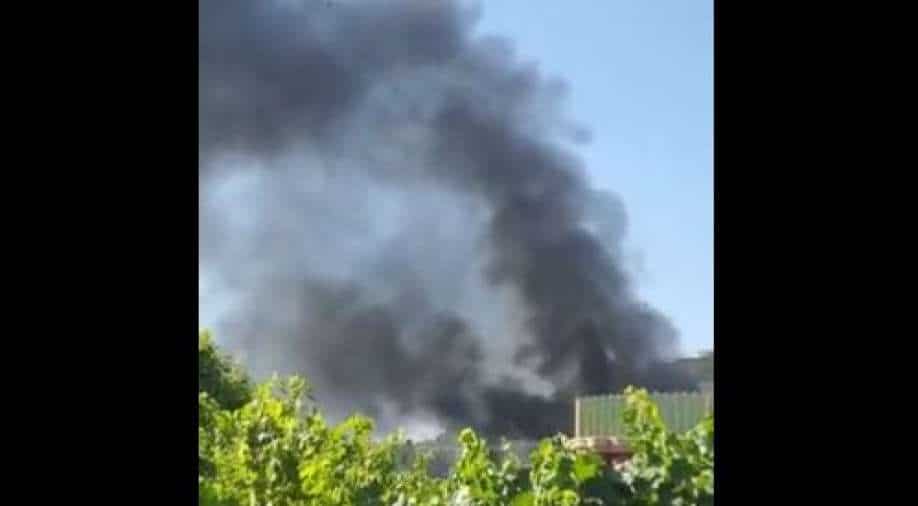 A group of unidentified gunmen stormed a gurdwara in Kabul, Afghanistan on Saturday, and opened fire. Photograph:( Twitter )

The armed terrorists carried out blasts and the place of worship is under seige, at present.Reports also say "hostages on the second floor of the gurdwara".

A Sikh Gurdwara in Afghanistan's capital Kabul was targeted by many bombs and gunfire on Saturday. After the blasts, media organisations published a video of the explosions in Kabul's Karta Parwan neighbourhood. There was also gunfire in the area.In the neighbourhood is the Karte Parwan Gurdwara. The attack resulted in two deaths and at least seven people were injured.

The explosion launched a column of dense smoke into the sky, causing alarm, according to the witness.

Afghanistan-origin Gurnam Singh, president of Gurdwara Karte Parwan, called Sikhs in the national capital to inform them of the attack, according to Sikhs in the capital.

Alarming news from #Kabul armed militants likely from #ISIS as per Gurnam Singh the president of Gurdwara,have entered Karte Parwan Gurudwara.He is weeping & many of those residing in Gurdwara have been killed as per him .Requesting @narendramodi ji & @MEAIndia for SOS assistance pic.twitter.com/5iEtCLMTwH

The event occurred at 6 a.m. local time, according to Manjinder Singh Sirsa of the BJP. A granthi was walking inside the gurdawara for morning 'parkash' of the Guru Granth Sahib when the tragedy occurred, he said. The first prayer in any gurdwara is 'Parkash.'

"We are deeply concerned at the reports emanating from Kabul about an attack on a sacred Gurudwara in that city. We are closely monitoring the situation and waiting for further details on the unfolding developments," the spokesperson of the Ministry of External Affairs in New Delhi tweeted.

We are deeply concerned at the reports emanating from Kabul about an attack on a sacred Gurudwara in that city.

We are closely monitoring the situation and waiting for further details on the unfolding developments. https://t.co/RFDRyGm6Xi

According to The Associated Press, Abdul Nafi Takor, a Taliban-appointed spokeswoman for the Interior Ministry, confirmed the incident but did not provide any information or indicate whether there were any deaths.The Islamic State's Khorasan Province affiliate has already claimed responsibility for attacks against mosques and minorities around the country.

The area has been blocked off by security forces as a precaution.