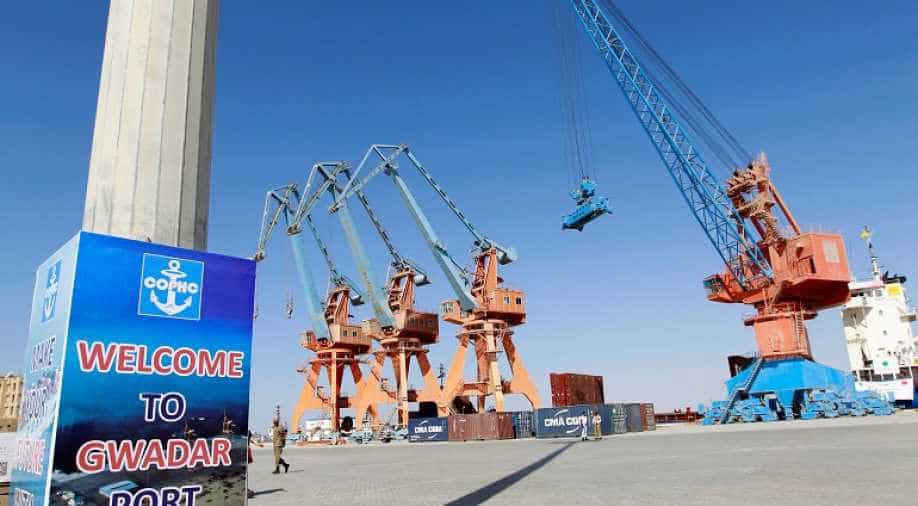 A general view of the port before the inauguration of the China Pakistan Economic Corridor port in Gwadar, Pakistan November 13, 2016. Photograph:( Reuters )

The attack came three weeks after separatist gunmen targeting naval and security forces killed 14 people after forcing them off buses in Balochistan.

At least one person has been killed after three gunmen stormed a five-star hotel in the southwestern Pakistani city of Gwadar, the centrepiece of a multi-billion dollar Chinese infrastructure project, the military said Saturday.

The gunmen shot dead a security guard at the entrance to the hotel.

"There are reports of a few people sustaining minor injuries," the minister said.

Mohammad Aslam, the on-duty officer in Gwadar, said ambulances and rescue officers were waiting at a road leading to the hotel, and that he could hear gunfire but that the operation was coming to an end.

"There were no Chinese or Pakistani guests in the hotel," he said, adding that only staff were present in the building.

No group immediately claimed responsibility for the attack.

The Pearl Continental is the only luxury hotel in Gwadar, formerly a small fishing village, and is where foreign and Pakistani business delegations, as well as diplomats, stay when visiting the city.

It sits isolated on a ridge overlooking the Gwadar port, which is the flagship project of the China-Pakistan Economic Corridor (CPEC).

The massive infrastructure project seeks to connect the western Chinese province of Xinjiang with Gwadar, on the Arabian Sea.

It includes a 392-kilometre (244-mile) highway from Peshawar to Karachi scheduled to be completed this year, a new highway, airport and hospital at Gwadar port, among many other projects in the country.

The port will provide China with safer and more direct access to the oil-rich Middle East than the waterway trade route it currently uses through the narrow Malacca Straits.

But it has also drawn its share of attacks, particularly from separatists who have long complained that residents do not receive a fair share of profits from the province's resources.

Pakistan's poorest and largest province, Balochistan has been rocked by separatist, Islamist and sectarian insurgencies for years.

Pakistani security forces have been targeting insurgents in the province since 2004, and have also been repeatedly accused by international rights groups of abuses there. The military denies the allegations.

Violence in Pakistan has dropped significantly since the country's deadliest-ever militant attack, an assault on a school in the northwestern city of Peshawar in 2014 that killed more than 150 people -- most of them children.

But militants still retain the ability to carry out attacks, and analysts have long warned that Pakistan is yet to tackle the root causes of extremism.

Saturday's attack came three weeks after separatist gunmen killed 14 people after forcing them off buses in Balochistan, which borders Afghanistan and Iran.

Earlier this week a suicide blast claimed by the Pakistani Taliban at one of the country's oldest and most popular Sufi shrines killed at least 12 people in the eastern city of Lahore.