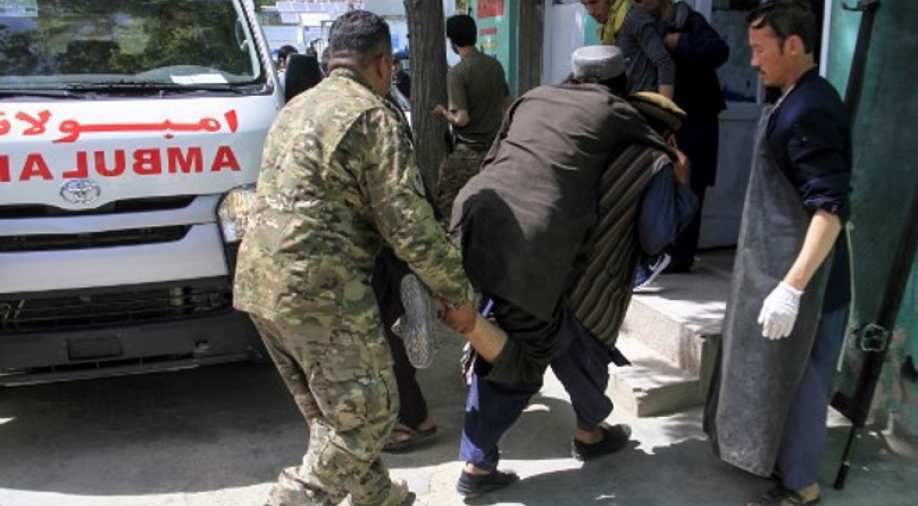 Afghan security personnel and voluntaries carry an injured man to a hospital following a suicide bomber attack with explosives packed in a vehicle in Ghazni province on May 22, 2019. Photograph:( AFP )

Several previous deadly attacks in Afghanistan have begun with militants blowing up a Humvee or another vehicle outside a target to devastate security forces protecting it, before gunmen rush to assault those insides.

At least four people were killed and more than a dozen injured when Afghan security forces fired a rocket on a Humvee stolen by the Taliban and packed with explosives, officials said Wednesday.

The US-made armoured vehicle was being chased by security forces as it raced for the gates to the eastern city of Ghazni, an interior ministry spokesman said.

"After it failed to stop at the signal of security forces, they opened fire, first hitting its tyres, then hitting it with a rocket," the spokesman, Nasrat Rahimi, said.

Local officials in Ghazni confirmed the account, saying that two civilians and two members of the Afghan security forces were killed in the explosion.

Several previous deadly attacks in Afghanistan have begun with militants blowing up a Humvee or another vehicle outside a target to devastate security forces protecting it, before gunmen rush to assault those insides.

Security forces can take hours to clear buildings after such attacks.

The Taliban claimed Wednesday's attempted attack in a WhatsApp message but said the Humvee blew up after its militants detonated their explosives, contradicting the official claim.

The interior ministry said as many as four militants were inside the Humvee, and were also killed in the blast.

The militant group, who have been waging a bloody insurgency to overthrow the Western-backed Afghan government, have continued their attacks even during the holy month of Ramadan, and despite government calls for a ceasefire.

The violence also comes as the group has met with the US for several rounds of talks in Doha, as Washington seeks a way out of its longest war.

Both sides have previously cited progress, though the talks appear to have stalled in recent weeks and it is not clear when the next round will begin.

On Wednesday, Afghanistan's interior ministry also said Afghan forces had killed at least seven "key members" of the so-called Islamic State group, in an operation in the eastern province of Kunar.

IS, which first emerged in Afghanistan in 2015, holds some ground in parts of Afghanistan's Nangarhar and Kunar provinces, close to the border with Pakistan.

The UN estimates that the extremist group has between 2,500 and 4,000 members in Afghanistan -- about the same number the Pentagon was citing two years ago, even though officials say thousands of jihadists have been killed.