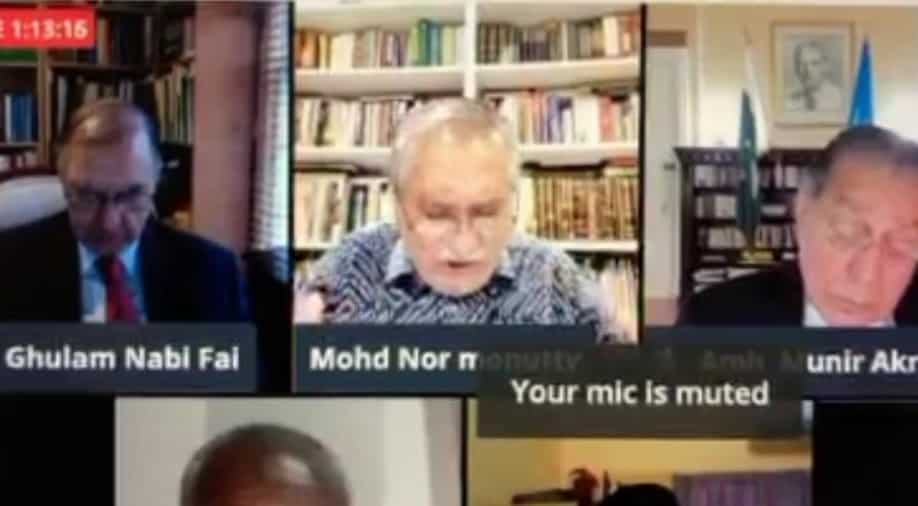 Like these global events were organised by Pakistani missions, in Malaysia, Prof Muhamad Roslan, Shan Saeed, economists were invited for 5th of August event by Pakistan mission in Malaysia.

A former United Nations Security Council listed terrorist and convict were among those Pakistani missions globally had lined up to mark the first anniversary of abrogation of special status to erstwhile state of Jammu and Kashmir.

The Pakistani Mission in Afghanistan hosted a virtual meet in which Gulbadin Hekmatyar also known as the butcher of Kabul and was till three years ago listed by United Nations security council. Hekmatyar's links with Pakistani establishment are well known given the backing to him by Islamabad during the Afghan civil war in the 1990s. Present on the occasion was Pakistani envoy to Kabul Zahid Nasrullah Khan.

In New York, the permanent mission of Pakistan to the United Nations invited Ghulam Nabi Fai for a virtual event. Earlier Fai was imprisoned for two years by a US for hiding$3.5 million fund he received from Pakistan's notorious spy agency Inter-Services Intelligence (ISI) for lobbying with US government on Kashmir. Pakistani envoy to UN on Munir Akram was present in the virtual meet.

Like these global events were organised by Pakistani missions, in Malaysia, Prof Muhamad Roslan, Shan Saeed, economists were invited for 5th of August event by Pakistan mission in Malaysia.

What is interesting is, days after that event, on Saturday former Malaysian Prime minister Mahathir Mohamad was present on an occasion on so-called "solidarity day on Kashmir". Under Mahathir, New Delhi-Kuala Lumper ties hit a nadir. Along with him, President Malaysian Consultative Council of Islamic Organisation (MAPIM) Mohd Azmi Abd Hamid was present. MAPIM is an umbrella organisation of Muslim NGOs in Malaysia and organised a visit of delegation on NGOs to POK last year. Pakistani PM Imran Khan was quick to thank him in a tweet for speaking against India.

Pakistan to mark one year of removal of special status for the erstwhile state of Jammu and Kashmir had several events, mostly for domestic consumption--like coming out with a new song, changing the name of a major highway in Islamabad to Srinagar highway and coming out with a new political map of the country showing Indian territories as part of its own.

India dismissed the new map of Pakistan calling it "an exercise in political absurdity" and "ridiculous assertions" which neither "legal validity nor international credibility."