For Rohingya refugees, makeshift homes no match for Cyclone Mora 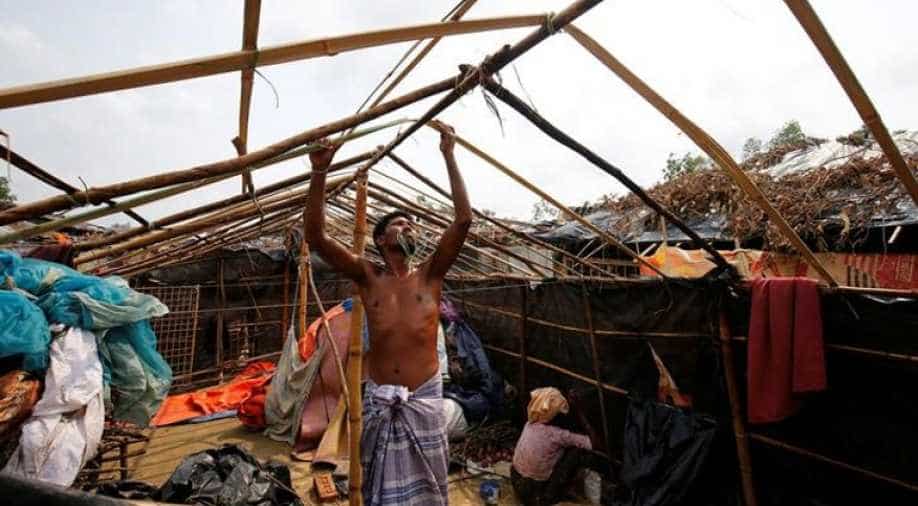 A Rohingya refugee man rebuilds his makeshift house which has been destroyed by Cyclone Mora at the Balukhali Makeshift Refugee Camp in Cox?s Bazar, Bangladesh May 31, 2017. Photograph:( Reuters )

Many of the rickety structures collapsed into a tangle of poles and plastic sheeting||Most Rohingyas were still in their flimsy shelters when the cyclone struck, with priority given to evacuating only the most vulnerable, including heavily pregnant women

The bamboo and plastic that sheltered tens of thousands of Rohingya refugees were no match for Cyclone Mora when it struck the Bangladesh coast on Tuesday.

Around 70 per cent of the makeshift shacks in the Balukhali refugee camp were damaged by the storm, which whipped through the region with winds of over 115 kilometres per hour (72 mph). Many of the rickety structures collapsed into a tangle of poles and plastic sheeting.

The 12,000 people at the camp, on a coastal strip about an hour's drive from the port of Cox's Bazar, are among the 74,000 Rohingyas estimated by the United Nations to have fled Myanmar since a military crackdown last autumn.

The Rohingyas, a Muslim minority shunned by Myanmar's Buddhist majority, are effectively stateless.

"We heard that a cyclone is coming. But there's no place we can go," 27-year-old Hamida Begum, who said she fled to Bangladesh three months ago after her husband disappeared, told Reuters on Wednesday.

"I hate being a Rohingya. We are being tortured in Myanmar. Now in Bangladesh we have no rights - nothing. After this cyclone, we don't have a roof. We are living under the sky. We have no future."

Throughout the camp, people tried to rebuild or repair their makeshift homes. One gaunt, elderly man, lay asleep on a mat in what had once been a shelter; its plastic sides torn open and debris strewn around him.

At least seven people were killed and 50 injured by Cyclone Mora, according to Mohammad Ali Hussain, chief administrator of Cox's Bazar district.

The Bangladeshi government has estimated that in all, there are about 350,000 Rohingyas in Bangladesh, the latest influx coming after the Myanmar army launched an offensive in response to insurgent attacks.

Authorities in Cox's Bazar and neighbouring Chittagong district evacuated 350,000 people from low-lying areas before the storm roared in from the Bay of Bengal on Tuesday.

But most Rohingyas were still in their flimsy shelters when the cyclone struck, with priority given to evacuating only the most vulnerable, including heavily pregnant women.

The UN Refugee Agency said winds gusting at up to 117 kilometres per hour damaged thousands of homes, toppled trees and ripped off roofing.

Post-cyclone assessments found that most of the refugees' homes were damaged to varying degrees, with around one in five completely destroyed.

"There's no roof. We are just drinking water. The little food we had in our home was all damaged after the cyclone," said Setara Begum, 30, a mother of two who said she crossed into Bangladesh two months ago after her husband disappeared. She has two children, a 2-year-old toddler and a 5-month-old baby.

"My children are crying for food. But I am helpless. I have no money. There's no hope. I don't know how I will raise my children."

With power supplies knocked out and fresh food in short supply, aid agencies handed out rations to refugees who thronged distribution points.

"We have no roof, no food. We're almost starving. But no one came here to help us. Just today I got some biscuits," said Minara Begum, 20, who said she fled Myanmar after military shot her father-in-law in October. She clutched a packet of energy biscuits distributed by the World Food Programme.

The refugees have received assistance from the International Organization for Migration and the UNHCR, but complain they have been left to fend for themselves by the authorities in Bangladesh.