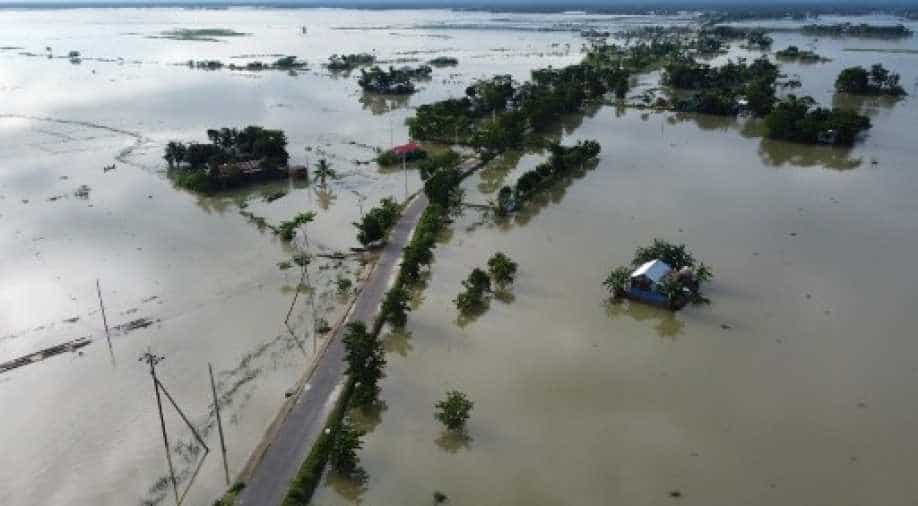 The two main rivers flowing through Bangladesh are already swollen with the Brahmaputra almost 40 centimetres higher than normal even as the Ganga is roaring.

Monsoon has arrived in South Asia and in Bangladesh it is spelling flood. The country has not seen such heavy rains in almost 10 years with one-third of Bangladesh already underwater.

At least 4 million people have been affected but the skies are not yet done. The village of Sunamganj is inundated and there is water as far the eye can see. The watery horizon mirrors the eyes of the distressed villagers.

"Both people and cattle are suffering... many people had to run to the shelters leaving their homes," Jamir Shikder, a villager, said.

The suffering is overflowing across Bangladesh. In Lalmornirhat, the villagers are trying to save whatever little remains of their rice and corn crops. The monsoon has rained over their hardwork and the the water has gushed into their homes.

"All our houses and furnitures went under water. We are really suffering," Abdul Monaf, a shopkeeper lamented.

The two main rivers flowing through Bangladesh are already swollen with the Brahmaputra almost 40 centimetres higher than normal even as the Ganga is roaring. It is only a matter of time before it bursts the banks, the water could flood 40 per cent of Bangladesh. Experts say this is the worst case scenario. So far, 15,000 people have fled severely-affected areas. It is the same scenario across the submerged border.

"The cooking ovens have been flooded. even our beds are underwater. How can we cook in this situation?" There is no easy answer to this question.

Floods have also displaced more than 2 million people in northeastern India with at least 77 people having lost their lives in Assam. Nepal too has been overwhelmed by the monsoon rains as floods and landslides have killed at least 50 people and 300 others have been displaced.

Floods are not uncommon in these parts of South Asia. Bangladesh alone is criss-crossed by 230 rivers. It shares 53 rivers with India and with the Wuhan virus already raining over the world, floods were the last thing the people of Bangladesh needed this year but the dark clouds have unleashed an omenous spell and officials say it is going to be the worst flood of the decade.