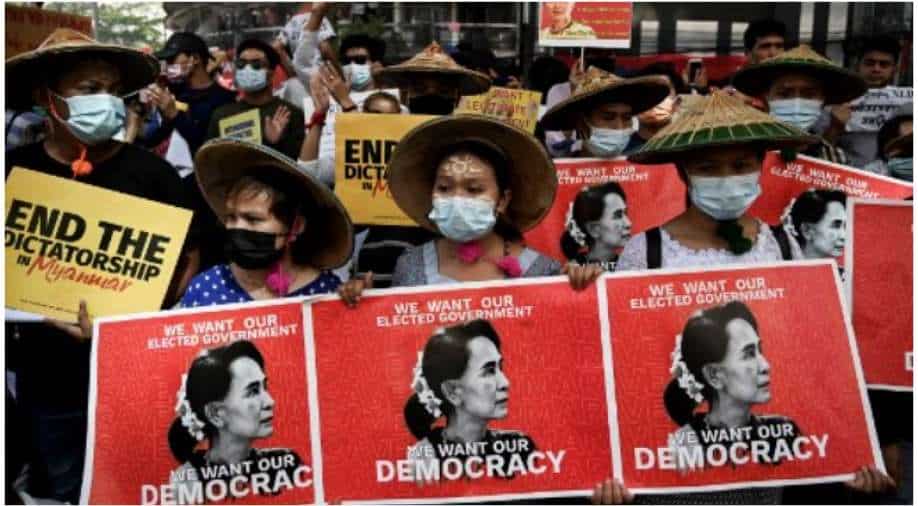 Protesters wearing traditional "thanakha", a yellowish-white cosmetic paste made from ground bark applied on the face, hold placards and flash the three-finger salute during a demonstration against the military coup in Yangon on February 25, 2021. Photograph:( AFP )

The five independent companies were named as Mizzima, Myanmar Now, 7-Day, DVB and Khit Thit Media. All have been active in covering protests against last month's military coup

Five media companies in Myanmar have been stripped of their licences, state television MRTV announced on Monday.

The five independent companies were named as Mizzima, Myanmar Now, 7-Day, DVB and Khit Thit Media. All have been active in covering protests against last month's military coup.

Meanwhile, three demonstrators were killed in Myanmar on Monday, witnesses said, while shops, factories and banks were closed in the main city Yangon in protests against last month's military coup.

Two of the victims died of gunshot wounds to the head in the northern town of Myitkyina, the witnesses said. It was not immediately clear who fired on the protesters although both police and the military were at the scene.

Photos posted on Facebook showed the bodies of two men lying on the street. Witnesses said they were taking part in a protest against the coup when police fired stun grenades and tear gas. Several people were then hit by gunfire from nearby buildings.

One witness, who said he helped move the bodies, said two people were shot in the head and died on the spot. Three people were wounded.

"How inhumane to kill unarmed civilians," said the witness, a 20-year-old man. "We must have our right to protest peacefully."

At least one person was killed and two injured during a protest in the town of Phyar Pon in the Irrawaddy Delta, a political activist and local media said.

Police and military have killed more than 50 people to quell the daily demonstrations and strikes against the February 1 coup, according to the United Nations.