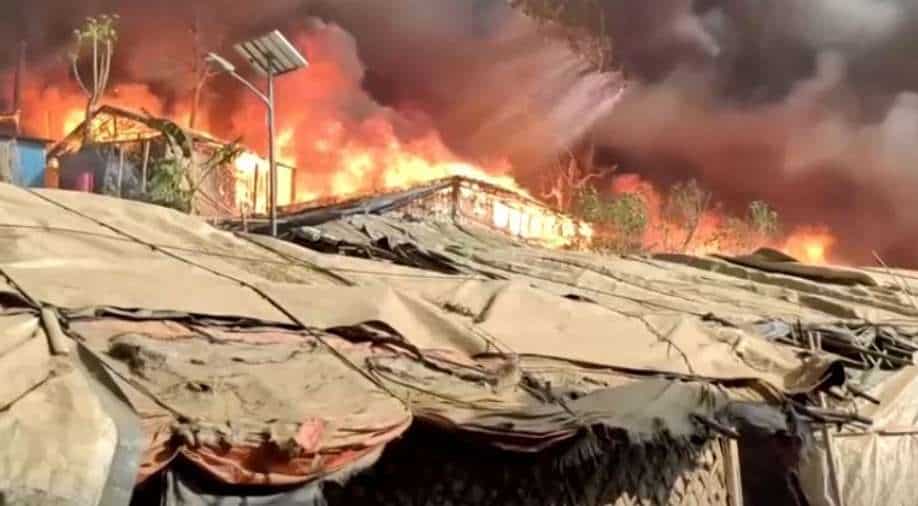 Thick columns of smoke were seen billowing from blazing tents as hundreds of firefighters and aid workers battled the raging flames.

A devastating fire swept across a Rohingya refugee camp in southern Bangladesh on Monday, destroying homes and killing several people at Balukhali camp in Cox's Bazar district in the late afternoon and spread quickly through at least four blocks.

Thick columns of smoke were seen billowing from blazing tents as hundreds of firefighters and aid workers battled the raging flames.

Fire services and rescue teams remained at the scene on Monday evening where they continued to try to control the fire as people scrambled to recover their possessions.

The fire gutted several temporary shelters as it spread through the camp.

"Today at around 1pm, the fire broke out in Balukhali camp. It has been hours and the fire is still burning. Maybe more than 1,000 shelters or most probably it won't be less than 1,000 shelters that have been burnt down. Many people have died and the elderly were unable to get out of the shelters. Elderly people have died the most," Nur Alam, a Rohingya refugee said.

In a statement, the UN High Commissioner for Refugees(UNHCR) Louise Donovan said, "Humanitarian partners have mobilised hundreds of volunteers from nearby camps to support the efforts, as well as fire safety vehicles and equipment. Efforts are underway to install fire breaks to prevent spread to further camps."

In January, a huge had fire swept through Rohingya camps in the same area destroying several homes. More than a million refugees live in mainland camps. A vast majority of refugees had fled Myanmar in 2017 from a military-led crackdown.