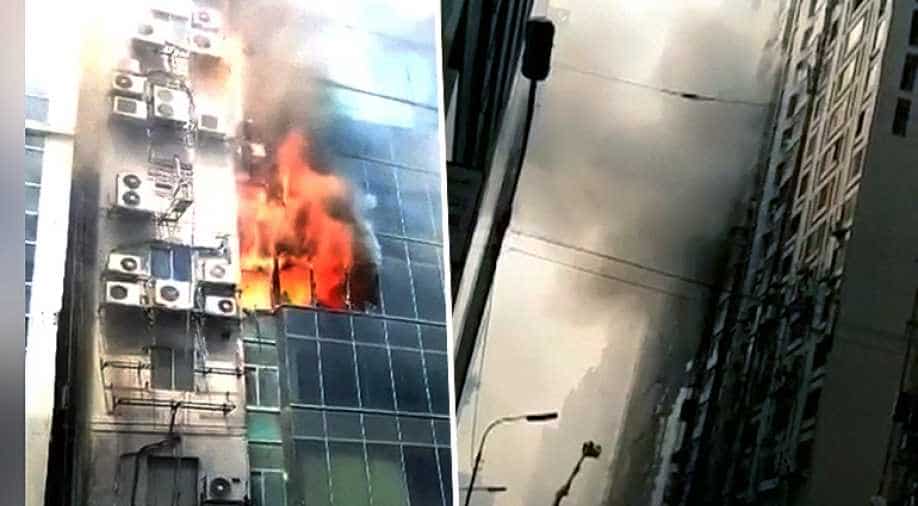 Fire breaks out at high-rise in Bangladesh, many trapped Photograph:( Reuters )

The fire broke out at a high rise called the FR Tower in Banani Road 17. At least six people were seen falling off the building when they were trying to escape the blaze.

At least five people were killed while Several others still feared trapped in a huge fire that broke out in a 22-storey building in Dhaka's Banani area on Thursday, in the latest blaze to hit the Bangladeshi capital.

The incident happened on Thursday afternoon in the building that houses several garment shops and internet service providers.

Four people died when they jumped off from different floors of the building while a student of the Dhaka University died due to the effects of the blaze, the Dhaka Tribune reported.

"A 35-year-old man, identified as Abdullah Al Faruk, an MBA student at Dhaka University, was declared dead after he was rushed to the Dhaka Medical College Hospital," the paper reported.

Another person, who was yet to be identified by the authorities, was declared dead at Kurmitola General Hospital after he fell off the building while trying to escape the fire.

"Similarly, three more male victims were declared dead on arrival by the doctors of United Hospital," officials were quoted as saying.

The people who lost their lives were among half a dozen people who jumped off from various floors of the high-rise building, resulting in grave injuries, senior officials said.

Apart from 21 fire tenders, Bangladesh Air Force helicopters and Navy commandos have been sent to the spot to douse the blaze.

While the actual reason behind the blaze was not known, eyewitnesses and a government officer at the spot said that the fire broke out on the eight floors of the building and later spread to the other floors.

However, fire service did not comment on what caused the fire.
They, however, said that around 35 people have been rescued from the building while the operation to save others was on.

"Three units of Bangladesh Navy are working to tame the blaze. We have brought around 50 per cent of the fire under control," Siraj, a Navy officer, said.

Last month at least 70 people were killed and over 50 injured when a fast-moving fire swept through apartment buildings and chemical warehouses in Dhaka's congested Chawkbazar area.