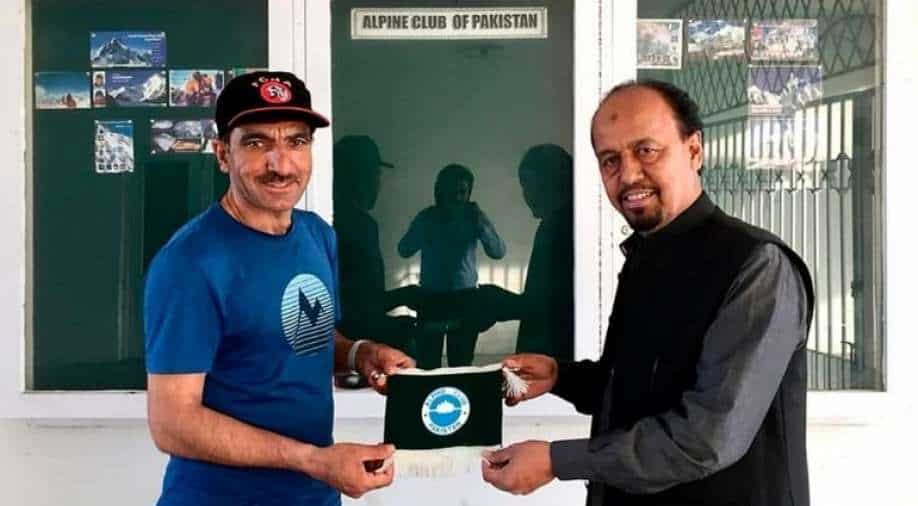 The three lost contact with base camp late on Friday and were reported missing on Saturday after their support team stopped receiving communications from them during their ascent of the 8,611-metre (28,250-foot) high K2

Families of the three mountaineers who went missing in Pakistan last week while attempting to scale K2, the world's second-highest mountain, were growing more desperate on Tuesday, a day after bad weather halted the search for the climbers.

Hopes for the survival of the three Pakistani climbers Ali Sadpara, John Snorri of Iceland and Juan Pablo Mohr of Chile were waning as heavy clouds continued to obscure K2.

Pakistani military helicopters were grounded, waiting for an opening in the weather to resume the search, said Karrar Haidri, head of the Pakistan Alpine Club.

The three lost contact with base camp late on Friday and were reported missing on Saturday after their support team stopped receiving communications from them during their ascent of the 8,611-metre (28,250-foot) high K2 sometimes referred to as ''killer mountain''.

Located in the Karakorum mountain range, K2 is one of the most dangerous climbs ? one never accomplished in winter until last month, when a team of 10 Nepalese climbers made history by scaling K2 for the first time in winter.

The three-day search for the climbers was halted on Monday as heavy clouds enveloped most of K2. The families in a statement late Monday said they made the ''difficult decision'' to wait for the weather to improve before the search resumes.

The statement said the search-and-rescue mission was receiving high-resolution satellite imagery that can enable it to view ''areas inaccessible to helicopters because of harsh winter conditions and excessive winds".

In winter, winds on K2 can blow at more than 200 kph (125 mph) and temperatures can drop to minus 60 degrees Celsius (minus 76 Fahrenheit). In one of the deadliest mountaineering accidents ever, 11 climbers died in a single day trying to scale K2 in 2008.

From New York, where she is assisting in the search and rescue mission, Vanessa O'Brien, the first American woman to summit K2, said she has spoken with the families of the climbers as time is running out and the survival of the three seems more impossible with every hour.

Together they crafted the statement thanking all those who have been assisting the search, including the Pakistani military which has been flying the helicopters, even as clouds hid the mountain and made each successive run increasingly dangerous. The family statement said of the search that, before it halted, it was ''72 gruelling hours of nonstop intensive search-and-rescue efforts". The dimming hope was particularly poignant as Tuesday marks the Chilean climber Mohr's 34 birthday.

''The families are so gutted as weather and winds have stopped the search and rescue,'' O'Brien said in an email to The Associated Press.

Among those waiting at the base camp was Sadpara's son Sajid Ali Sadpara, who had begun the climb with his father but was forced to abandon the summit attempt after his equipment failed. He waited 20 hours at a lower camp before making the descent last week. Since the search started, he has been on helicopter flights, searching for his father.

''We know only a miracle can bring them back alive and we are waiting for the miracle,? Sajid said on Tuesday. He also said his father had volunteered for dozens of search operations and had ''saved many climbers.''

Dwarfed by Mount Everest, K2 is considered one of the most difficult ascents ''for every four climbers attempting to summit K2, one climber dies, said O'Brien, compared to one in every 20 attempting to climb Nepal's Mount Everest.

Chhang Dawa Sherpa, a member of the Nepalese expedition last month, has also been assisting in the search and rescue, as has Sadpara's close friend Roa Ahmad.
O'Brien summitted K2 in 2017, after three unsuccessful attempts, becoming the first American and British woman since she holds dual nationality to summit the treacherous peak. It was a ''tough summit," she recounted to the AP. ''Sixteen hours one-way."

Few people would consider something as difficult and dangerous as a summit ascent, she added, but ''mountaineers do it all the time''.