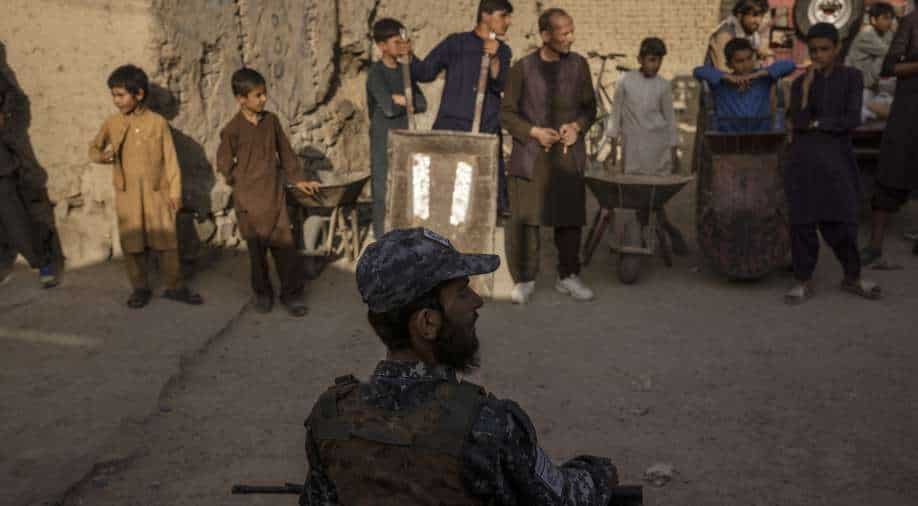 A Taliban guard watches as Afghans receive food aid during a distribution by the World Food Program in Kabul Photograph:( The New York Times )

Nearly four months since the Taliban seized power, Afghanistan is on the brink of a mass starvation that aid groups say threatens to kill 1 million children this winter.

One by one, women poured into the mud brick clinic, the frames of famished children peeking out beneath the folds of their pale gray, blue and pink burqas.

Many had walked for more than an hour across this drab stretch of southern Afghanistan, desperate for medicine to pump life back into their children’s shrunken veins. For months, their once-daily meals had grown more sparse as harvests failed, wells ran dry and credit for flour from shopkeepers ran out.

Nearly four months since the Taliban seized power, Afghanistan is on the brink of a mass starvation that aid groups say threatens to kill 1 million children this winter.

The country’s hunger crisis has drastically worsened in recent months. This winter, an estimated 22.8 million people — more than half the population — are expected to face potentially life-threatening levels of food insecurity, according to an analysis by the UN World Food Program and Food and Agriculture Organization. Of those, 8.7 million people are nearing famine — the worst stage of a food crisis.

Since the Taliban seized power, the United States and other Western donors have grappled with questions over how to avert a humanitarian catastrophe in Afghanistan without granting the new regime legitimacy by removing sanctions or putting money directly into the Taliban’s hands.

But as the humanitarian situation has worsened, aid organizations have called on the United States to move more quickly.

US officials showed some flexibility around loosening the economic chokehold on Afghanistan last week when the World Bank’s board — which includes the United States — moved to free up $280 million in frozen donor funding for the World Food Program and UNICEF. Still, the sum is just a portion of the $1.5 billion frozen by the World Bank amid pressure from the U.S. Treasury Department after the Taliban took control.

The Taliban government has repeatedly called on the Biden administration to ease economic restrictions and has worked with international organizations to deliver some assistance. But already, millions of Afghans have been pushed over the edge.