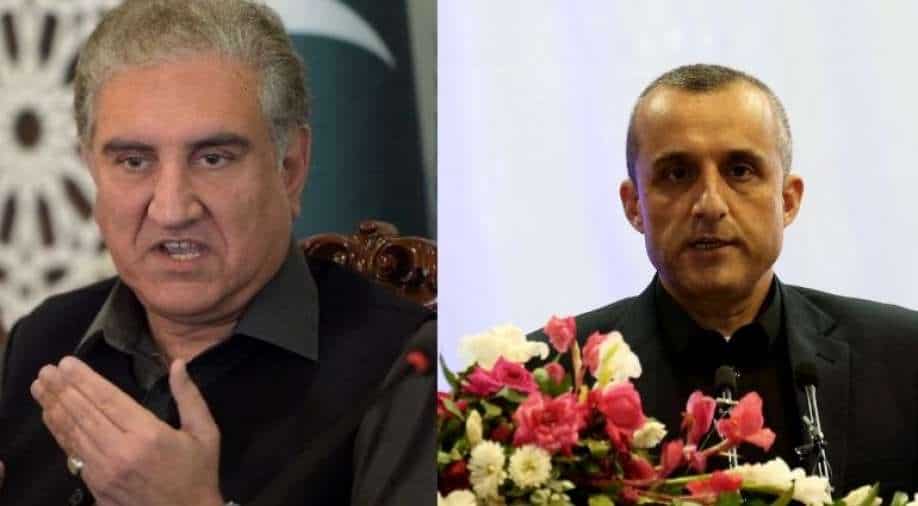 In an exclusive interview to WION, Afghanistan's former vice president Amrullah Saleh said several people have been leaving from Kandahar, Herat and Jalalabad amid the Taliban's takeover of the country

Afghanistan's former vice president Amrullah Saleh speaking exclusively to WION said Pakistan has been helping terrorists and its foreign minister Qureshi is acting like the foreign minister of the Taliban.

“If they can, congratulations! Let me see how next month they can pay the teachers and civil servants in the country," he said.

Saleh also challenged Pakistan on how it will address issues related to Afghan youth, COVID-19 and drought, and the fact that western economies are “not providing a penny” to the Afghan government.

“Pakistanis have made a miscalculation, a misjudgement,” he said, adding that the Taliban has also made the mistake of capturing Kabul that led to the exodus of people.

Now, Pakistan is in a situation to subsidise the terror group, he said, adding, “and they will bear the consequences.”

“US may not say it publicly but privately every American knows that it is the GHQ and it is the ISI who have humiliated the western civilization,” he said, referring to the Pakistani Army and its spy agency. “It has not ended, let’s wait and see how it evolves.”

“No country stood by its word. We have been in forefront of defending global security, rights and values,” he said while adding that it is very unfair to see how some are saying that the Afghans did not fight the Taliban.

“That’s the most ridiculous statement. The Afghan forces fought bravely,” he said, adding they were stabbed in the back.

“The negotiations in Doha was the backstabbing of our forces, the American forces and all those brave men and women in uniform who served in my country,” Saleh said.

The former vice president of Afghanistan said the exodus of Afghans from Kabul airport is only the tip of the iceberg, describing the situation akin to “aliens invading our country". He said Afghans are leaving the country from Kandahar, Herat and Jalalabad too.

When asked about what his resistance movement from Panjshir expected from India, Saleh said, “I’m not sure India will sit idle.”

“No country in the region wants to see Pakistan dominating Afghanistan and projecting its power from Afghanistan. Pakistan will pay a heavy price," he said.

“They are on the wrong side of the equation. They are helping terrorists - the Taliban."

Saleh was dismissive of the idea that the Taliban government will be different this time, adding they have no popular support.

“If we hold elections tomorrow, the Taliban will not be able to even win one provincial council seat. They are hated. They are seen as a proxy of the Pakistanis,” the vice-president said.

Little things like allowing a school here or an NGO there is not change, he said, characterising Taliban’s promises as a bid to buy sympathy.

Asked about the Panjshir Valley resistance, Saleh said it is not how much land is in control but the substance of the movement that matters. “What is relevant is our message. Our message is hope and it hasn't died."

“To secure the rights of our women and girls, we do not need the US troops, we will do it ourselves. The strength of that message is shaking the Taliban,” he said. “Taliban understand that it’s not how many guns we have. They understand the strength of our message and narrative is what matters.”

Saleh said the resistance is not limited to Panjshir only. “Panjshir is now an icon. It’s a symbol representing the aspirations of a lot of people. We have become the capital of the oppressed Afghans... sentimentally and politically all Afghans are with us."

“The first thing we need is moral and political acceptance. We ask the United Nations and countries which have diplomatic ties with Afghanistan to read the Constitution. It is very clear - in the absence of a president, the first vice president automatically becomes acting president."

“What is very, very clear is that we are not surrendering,” Saleh said. “We will not give allegiance to an Emirate whose Emir has not been seen by the Afghans and most likely even tonight he is staying in an ISI safe house.”

"If [Taliban leader Hibatullah] Akhundzada is really in Afghanistan, they have to show him. He has to speak. Many of the Taliban leaders in Kabul now have come from Pakistan," Saleh claimed.

“Pakistan backing Taliban is not a new story. Our country has been occupied by the Pakistani establishment,” he said citing Pashtun experts and writers.

He said the Taliban's control of a lot of provinces is very shallow, adding that the defeat of Afghan forces was not a military victory but was more psychological in nature.

US President Joe Biden’s withdrawal decision reinforces the conspiracy theory that Doha talks were meant to legitimise the Taliban, he added.