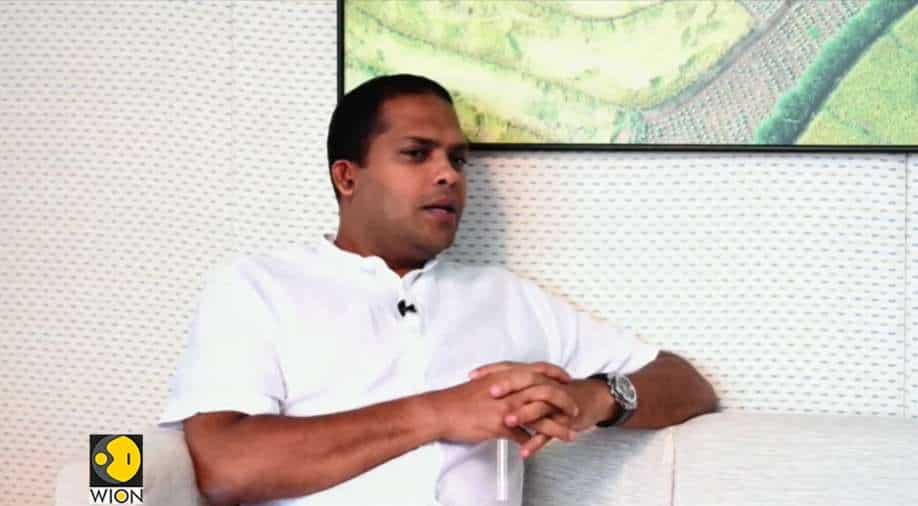 In an exclusive conversation with WION, Fernando opened up on a range of issues—from his party members seeking his dismissal, to revealing why he joined the government.

Harin Fernando, a Member of Parliament representing the opposition, had recently joined Sri Lankan Prime Minister Ranil Wickremesinghe’s government and was sown in as the new Minister of Tourism and Lands, irking his party Samagi Jana Balavegaya (SJB).

He said had that he joined the government to help Wickremesinghe in uplifting Sri Lanka’s battered economy, but his party members viewed it as a sign of betrayal.

In an exclusive conversation with WION correspondent Dasuni Athauda, Fernando opened up on a range of issues—from his party members seeking his dismissal, to revealing why he joined the government.

He also blamed the brother of President Gotabaya Rajapaksa and former prime minister Mahinda Rajapaksa for the widespread violence that erupted on May 9 between the anti-government agitators and supporters of Mahinda.

WION: Is the new govt unstable and can it run smoothly?

Fernando: It's a risk…a challenge, but we are working through these challenging times and doing our jobs. Like I am taking care of my department and trying to fix it, make the tourists visit Sri Lanka.

WION: As of now, whom are you representing, the government or the opposition?

Fernando: I am still an opposition MP in the cabinet. I think (PM) Ranil's intentions are honest. I believe that this man is taking the challenge, and it is my duty is to support him. It's not about anyone’s personal interest, he is only trying to stabilise (the economy). I hope Sri Lankan people view it without any judgements.

WION:  Your party, SJB, is working to suspend you. Your political career is hanging in balance. What are your views?

WION: Days after assuming your responsibilities, you wanted the government to push for the 21st amendment of the Constitution (aimed at curbing the unfettered powers of President Gotabaya Rajapaksa). What made you made you raise this issue?

Fernando: I wanted to bring the 21st amendment and the 22nd amendment ( to ensure that no dual citizen can hold a position as a member of Parliament or be the President of Sri Lanka). I believe it will happen in stages. Even the protestors want it and sought a clear timeline. The bar association gave18. But what I am concerned about is the SJB refusing to support this.

I think more power should be given to the PM as he is responsible to the parliament. Whatever decision he makes, has to be endorsed in the parliament. This is the system we want in the country. 21st amendment should be the priority and the 22nd should be next.

We must set our timelines. Hence, I was very vocal. If they (government) delay it, I will be the first to come out. I joined with a good heart, faith, and intention

WION: In the parliament, you said that the president is failing. However, you are working with him to overcome the crisis. Why?

Fernando: Correct. What matters to me right now is not my personal agenda. Sri Lanka is undergoing one of its worst crisis. If (PM) Ranil hadn’t taken the charge, I would have assumed the power by now. There are long power cuts and scarcity of fuel. I am being targeted because I joined the government, but I support the call for the ouster of President Gotabaya Rajapaksa. I thought that it's better to fight with the dragon rather than stay out and talk about the dragon.

My whole purpose is to make sure that we are stable position, hence I took over the tourism department, which has performed worst. The tourism sector used to generate $5-6 billion in revenue, but now, it is barely generating $1 billion. We hardly can afford this and if this goes on, we will crash. That is why I left party politics and joined for what I believe in.

WION: On May 9, the peaceful protests suddenly turned violent. What was the cause? Who do you think was behind this incident, as a leader of your party was also attacked?

Fernando: I was lucky that I was not attacked that day. I think it is former PM Mahinda Rajapaksa's fault. Any rational person wouldn’t have gone against these protesters. He is actually responsible for this violence. But I think that Mahinda wanted to show his brother… I believe something was brewing internally which got out of control.

People hate politicians and this is a time when the entire country should come together and call it the truth. I now believe that we have to go beyond and let the protest go, to keep the pressure on the president. But we all need to get together to fix the country because it's not looking good.

WION: Do you think the protesters should call it quits now?

Fernando: Not really. I believe Sri Lankans are very nice people. But I feel that the politicians whose houses got attacked are filled with vengeance, and seeking revenge. They know the faces of those who attacked their houses. And it doesn't look good as many people are being arrested, which would not stop.

But we have to come together. Ranil Wickremesinghe has proposed a brilliant idea to attract youngsters into politics, there will be oversight committees in the parliament headed by MPs in the parliament. They are trying to rope in three young representatives from the protest.