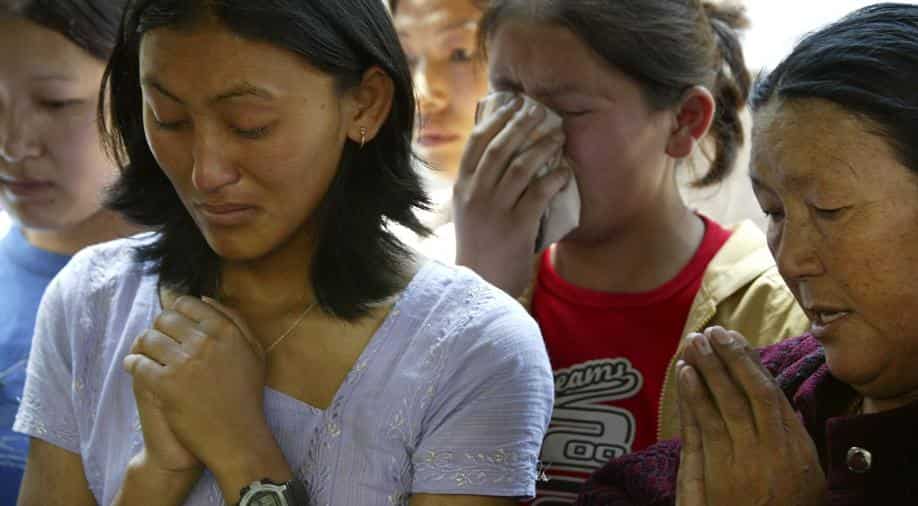 Family and friends mourn at the cremation of 28-year-old Everest climber and Sherpa guide Karma Gyalzen May 27, 2003 in Kathmandu, Nepal. Photograph:( Getty )

Follow Us
Nepali rescuers abandoned plans to retrieve the bodies of two Indian climbers missing on Mount Everest today, hoping instead to bring them down next year, an expedition operator said.
The two men -- identified as Paresh Nath and Goutam Ghosh -- were near the summit of the 8,848-metre (29,029-foot) mountain on 21 May when they lost contact with the rest of their team.
Rescuers found Nath`s body last Friday near the South Col, located at an altitude of 8,000 metres and marking the beginning of the "death zone".
Ghosh`s body was also spotted the same day on the Balcony -- a mid-way stop between the South Col and the summit, before strong winds forced back rescuers, Wangchu Sherpa of Trekking Camp Nepal told AFP.
With the short window for climbing on the mountain now closing and bad weather setting in, rescuers said they could not recover the corpses.
"Rescue workers have called off their operations to bring back the dead bodies of Indian climbers Goutam Ghosh and Paresh Nath because of bad weather," Sherpa said.
"We hope to recover (them)... next season."
The cause of their deaths has not been established. But the "death zone" is notorious for its difficult terrain and thin air, as low levels of oxygen raise the risk of altitude sickness.
The missing climbers were part of a team of four, one of whom -- Subhash Pal -- died after falling ill on Sunday while the fourth member, a woman, was rescued and taken to hospital.
Subhash Pal was the third mountaineer to die on Everest this season after an Australian and a Dutch climber succumbed to altitude sickness. All three bodies were transported to Kathmandu last week.
Some 400 people, including more than 150 foreigners, have summited Everest this season after two consecutive years of deadly disasters that led to almost all attempts being abandoned.
Hundreds fled Everest last year after an earthquake-triggered avalanche at a base camp killed 18 people.
Only one climber reached the top in 2014 after an avalanche killed 16 Nepali guides that year.
Despite the risks and recent disasters, Everest`s allure remains undimmed, with Nepal issuing 289 permits to foreigners for this year`s spring climbing season.
Mountaineering is a major revenue-earner for the impoverished Himalayan nation.
The successful summits this season is expected to boost the industry, which was left reeling after an earthquake last year killed almost 9,000 people nationwide.
Read in App