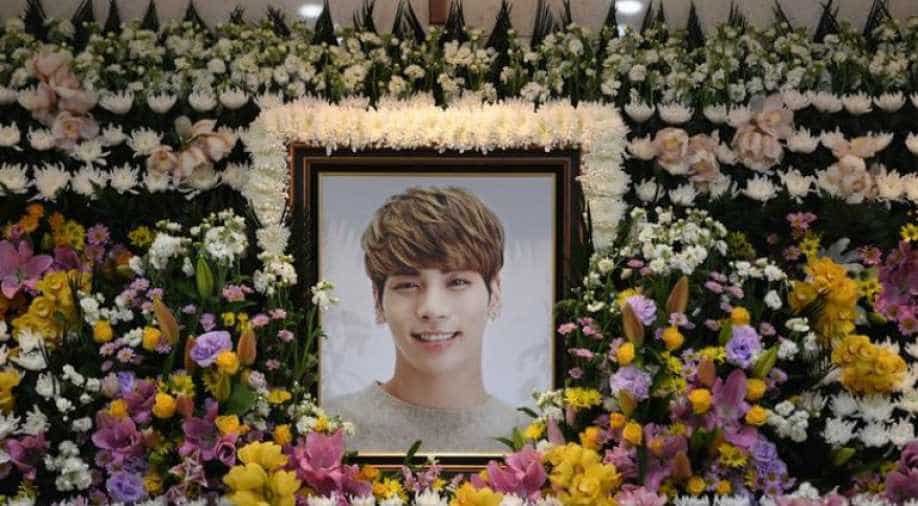 A portrait of Kim Jong-hyun, the lead singer of top South Korean boy band SHINee, is seen on an altar during a memorial service for him in Seoul, South Korea Photograph:( Reuters )

Weeping, wailing and embracing one another, young men and women dressed in grey and black lined the road as the hearse carrying Kim`s coffin left the hospital.

"I am so sad that I cannot even cry. My heart aches so much", 18-year-old Chinese fan Chen Jialin said.

Relatives and celebrities react as the coffin of Kim Jong-hyun, lead singer of top South Korean boy band SHINee, is transferred to a hearse during the funeral at a hospital in Seoul. (Reuters)

Kim, 27, was found unconscious next to burning briquettes on a frying pan inside a serviced residence in Seoul on Monday, police told Reuters.

Yonhap news agency had reported that the singer sent a final message to his sister asking her to "let me go".

Kim spent nearly a decade as one of five members of SHINee, one of the most popular bands in the country, as well as a solo artist. His death was a massive blow to the worldwide fan base that Korea`s K-pop music has attracted in recent years.

K-pop is the rage in Asia and other continents, with a song by the group BTS maintaining a spot on the Billboard 200 for seven weeks as of the end of November.