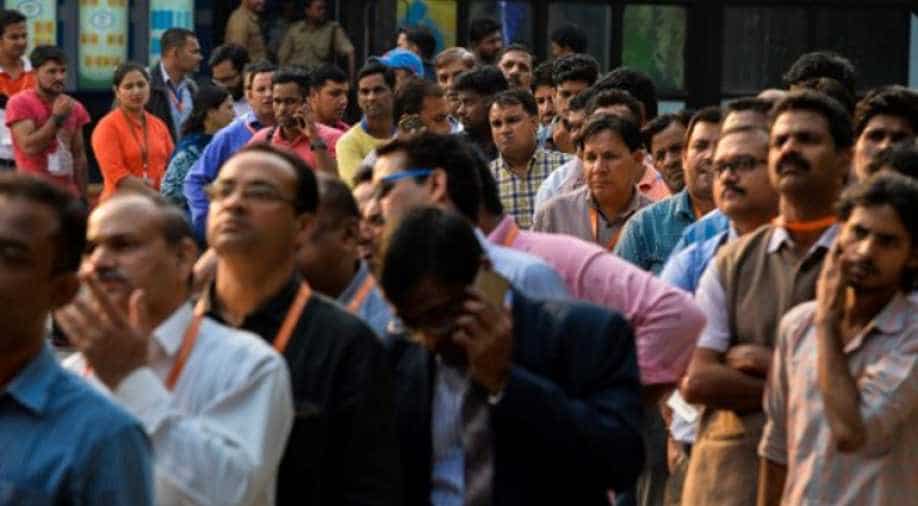 Only the Left parties, the CPI(M) and CPI, have called for a 12-hour bandh (strike) in West Bengal. In photo: People wait in line to withdraw money from a mobile ATM machine in New Delhi. Photograph:( AFP )

The demonetisation of the country's 500- and 1,000-rupee notes by the Modi government has brought about a rarely-seen unity among the Opposition parties -- they have called for nationwide protests today -- but they stand divided over the way they would protest the measure.

The Left parties have called a 12-hour bandh (strike) in West Bengal to protest against the demonetisation but chief minister Mamata Banerjee's Trinamool Congress (TMC) will not join the strike; her party will only hold protests.

The Congress too has decided against a bandh. Senior party leader Jairam Ramesh said no "Bharat Bandh" (India Strike) has been called by the party, but that it will hold nationwide protests as part of a "Jan Aakrosh Diwas" or People's Day of Anger. A strike he said would only add to people's miseries.

The JD(U) has decided not to participate in the protests after its leader and Bihar chief minister Nitish Kumar welcomed the demonetisation, calling it a "courageous step".

Mamata Banerjee's TMC and Delhi Chief Minister Arvind Kejriwal's AAP are the only parties which have demanded a rollback; the other parties have voiced their displeasure over the way the demonetisation is being implemented and the hardships that it is causing common people.