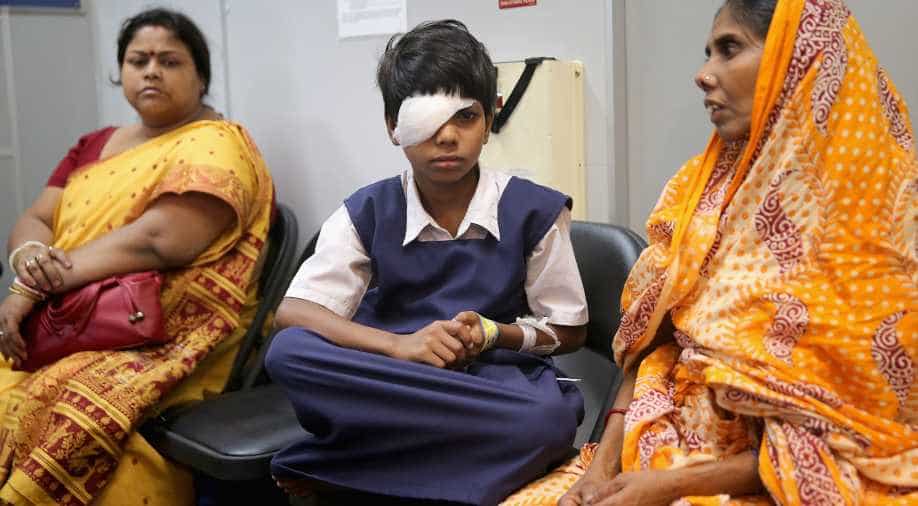 During her solo visit to India the Countess is supporting the sight saving charity ORBIS. The Countess witnessed patients' surgery and met patients' during her tour of the plane. (Photo by Chris Jackson/Getty Images) Photograph:( Getty )

Follow Us
Delhi's population of 10 million is served by 38 state-run hospitals.  The job they do is admirable given the workload -- India's doctor to patient ratio is 1:1,700 -- a visit to one is not always a pleasant experience. Government-run hospitals tend to be a messy, chaotic affair.
Madhuri, therefore, is fortunate. She has a fever and has been feeling nauseous but she will not have to make the trek to the nearest government hospital. She will instead go to her mohalla or neighbourhood clinic the first of which was set up by Delhi's Aam Aadmi Party (common man party) government in July 2015.
At the clinic, Madhuri is taken to a doctor who gives her a physical check-up and then takes a blood sample to test for dengue fever.
Madhuri's results come back in under a minute.
In under a minute! How can that be possible? Even a private laboratory in Delhi takes at least a day to return test results.
The miracle worker in this little two-room clinic in the Indian capital's Peeragarhi area is Swasthya Slate, a compact, 8x12-inch portable device that hooks up to Android phones and tablet computers and allows doctors to conduct as many as 33 diagnostic tests – including for malaria, dengue, hepatitis B, typhoid, and HIV. A blood or urine sample is placed on a disposable strip, inserted into the Slate, and in less than a minute the results show up on the doctor's tablet or phone.
The Slate can also do an ECG and check blood pressure and heart rates.
((insert picture here of the Swasthya Slate)
The Swasthya (means health in Hindi) Slate has been a hit so far with both doctors and patients. Each unit costs about Rs 40,000 or US$ 600. Aided by the Slate, a doctor is able to see and diagnose about 50 per cent more patients than he did before. “As many as 300 patients come to us a day. Earlier, I could diagnose about 100 of them. Today, over an eight-hour shift and with the help of the Slate, I can diagnose as many as 150," says Rather Basit Nazir, the government doctor who has been manning the Peeragarhi clinic.
The next time those 150 patients come in, Nazir will have their medical history handy, for the Slate stores it in the cloud.
“I have all his information handy before a patient gets to me. I don’t have to call him back with his test reports. That helps both us and the patient save time,” says Nazir.
Which was exactly why Dr Kanav Kahol, a biomedical engineer and researcher at Arizona State University, invented the Slate – to speed up testing and to cut costs. The Slate also recommends what treatment and medication can be given to patients, says Dr Vijender Jeph, who heads business development for the Slate.
Madhuri's test comes back positive. She does have dengue fever.
Dr Basit checks his phone – to see what the Slate tells him about treatment – and writes out a prescription. As an added precaution, he also tests Madhuri's four-year-old son. His test has a negative report.
The mohalla clinics have themselves been revolutionary. They were set up to pare down the overcrowding that government hospitals in India, especially in the bigger cities, are synonymous with and, of course, to provide affordable healthcare to people closer to their homes. Private hospitals in India tend to be good but expensive. The Delhi government had promised that a 100 clinics would come up by July. So far they have set up 22.
Which means they will probably miss their deadlines, but the clinics which will be staffed by doctors from government hospitals and will also function as immunisation centres for children, have certainly found a fan in Madhuri. Going to a government hospital earlier would take up almost two days, she says. One day to get there, wait in line, and then go back the next day to collect her reports. "Plus, I never got free medicine there. Here I do. And the tests are so quick. I certainly hope my mohalla clinic stays. In fact, I hope they build all 100."