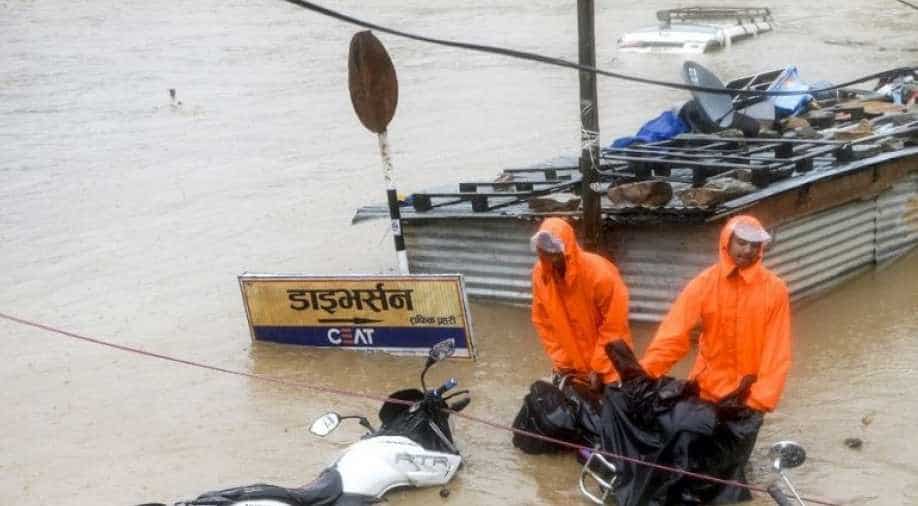 Nepali traffic police personnel try to carry away a motorcycle among floodwaters after the Balkhu River overflowed following monsoon rains at the Kalanki area of Kathmandu. Photograph:( AFP )

'Over 3,366 people have been rescued from across the nation. Data collection and relief distribution is in full swing,' the ministry said

The death toll in floods and landslides triggered by incessant rains since last week in Nepal rose to 90, with about 31 people still missing, the country's home ministry said on Thursday.

"Over 3,366 people have been rescued from across the nation. Data collection and relief distribution is in full swing," the ministry said.

The torrential downpour which has battered the Himalayan nation since July 11 has affected around 31 of the 70 districts across the country.

As per government figures, as many as 27,000 police personnel, 8,000 Army personnel and 8150 Armed Police Force (APF) personnel have been mobilised to the flood-affected regions.

The rescue and relief efforts are currently underway in the districts of Rautahat, Dhanusha, Mahottri, and Dolpa. Helicopters have been kept on standby in Kathmandu, Itahari, and Dhanusha to meet any eventualities.

Provinces 1, 2 and 3 are the worst hit, with Lalitpur, Bhojpur and Rautahat witnessing the highest death toll.

In addition, the lack of sanitation has increased the fear of the breakout of epidemics.

Meanwhile, the Nepal government has decided not to seek foreign aid and instead directed the local bodies to expedite rescue and relief work.