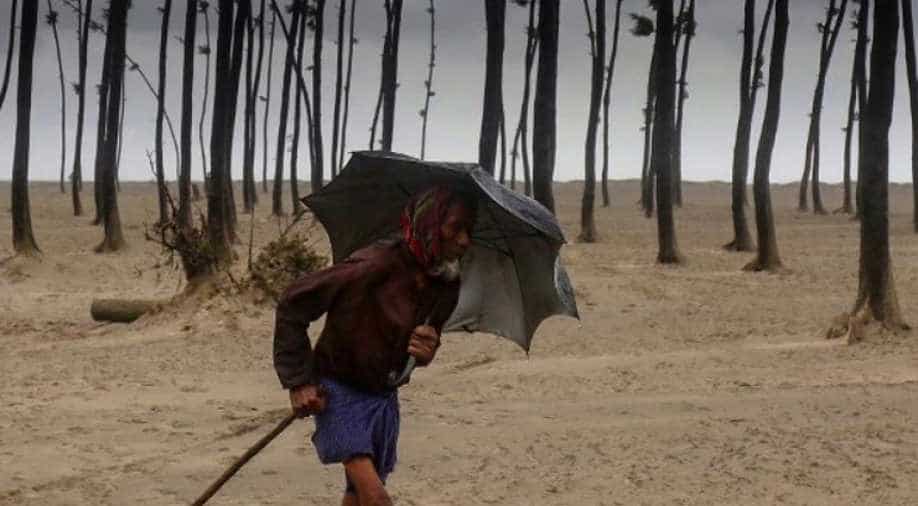 Bad weather is likely to continue in Bangladesh for the entire day with rainfall in different parts of the country. Photograph:( AFP )

At least two persons killed and 20,000 houses damaged as cyclone Mora hit Bangladesh ||Bangladesh Meteorological Department has confirmed that the cyclone has moved past the Bangladesh territory

At least two persons were killed and 20,000 houses were damaged in Cox's Bazar in Cyclone Mora that hit the Bangladesh coast at 6:30 am today, Ali Hossain, deputy commissioner of Cox's Bazar district confirmed to WION.

Assessment of the losses and damages will continue throughout the day. Bangladesh Meteorological Department has confirmed that the cyclone has moved past the Bangladesh territory.

A windspeed of 135 kilometres per hour was recorded at Teknaf, in the southernmost part of Bangladesh, which eventually lost its strength as it moved in the northerly direction, said Shamsuddin Ahmed, chief of Bangladesh Meteorological Department. The cyclone is likely to go over to northeast India in parts of Mizoram and Meghalaya.

Bad weather is likely to continue in Bangladesh for the entire day with rainfall in different parts of the country. The met office hoisted a danger signal level 10, which meant the cyclone carried the highest threat level that in the past has lasting devastation during tropical cyclones Sidr and Aila in 2007 and 2009.

The cyclone did not have an as devastating impact as was feared, said Zillur Rahman Chowdhury, deputy commissioner of Chittagong. "We are getting reports that some houses were partially affected. Some trees have been uprooted. There is no loss of life of either human beings or animals," Chowdhury told WION. Authorities are still getting details from the field administration.

The disaster management department had earlier reported about evacuating 300,000 people from their homes in 10 districts to cyclone shelters ahead of the landfall. Announcements were made in advance to alert people to move to safe locations since yesterday. Evacuation plans were taken in 19 districts in the coastal belt across Bangladesh.

Authorities had earlier suspended flights in Chittagong and Cox's Bazar and water transports in the coastal lines to avoid casualties. Local journalists reported disruption of telecommunication networks in Teknaf and Cox's Bazar.

"The cyclone is not stronger than Sidr, but its threat level is not negligible," Ahmed told WION earlier.