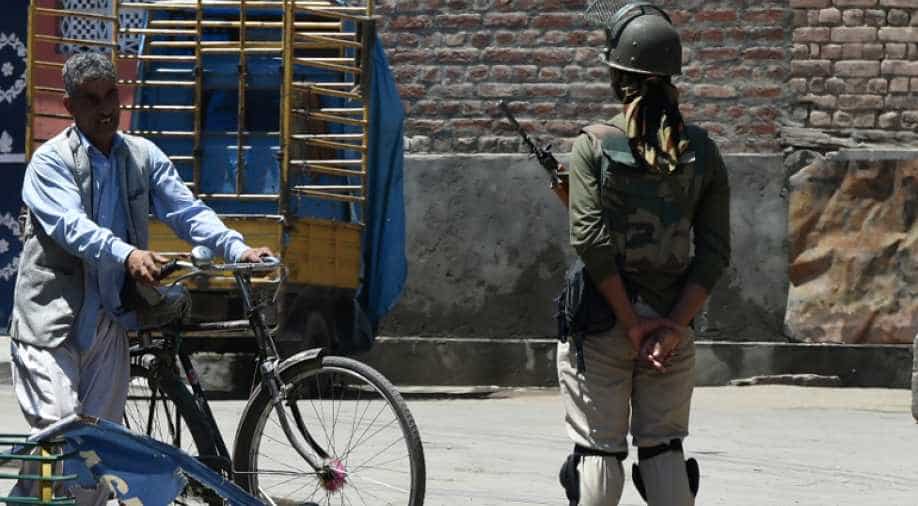 An Indian paramilitary trooper stops a Kashmiri man during a curfew in downtown Srinagar on May 29, 2017. Photograph:( AFP )

Curfew-like restrictions continued in parts of Kashmir for the second consecutive day on Monday as a precautionary measure to maintain law and order following the killing of Hizbul Mujahideen commander Sabzar Bhat in an encounter with security forces.

Strict restrictions also continued in Anantnag and Shopiandistricts and Pulwama town in south Kashmir and in the township of Sopore in the Baramulla district of north Kashmir, the officials said.

In all the restrictions were in place in four out of 10 districts in the valley.

They said Section 144 of CrPc continued in the districts of Budgam and Ganderbal in central Kashmir.

The officials said the curbs in these areas continued for the second day as a pre-emptive measure to prevent spread of violent protests which took place on Saturday immediately after Bhat was killed along with his colleague in an encounter in Soimoh area of Tral in south Kashmir's Pulwama district.

A civilian was also killed allegedly in cross firing between militants and security forces during the encounter.

Though there were few stone-pelting incidents in some areas of the valley on Sunday the situation remained under control.

A police spokesman said on Sunday that there were six incidents of stone pelting in Pulwama, Kulgam, Shopian and Sopore, but the situation across the valley remained peaceful and under control.

He said police and security forces used maximum restraint while dealing with the situation at these places and miscreants were chased away.

Meanwhile, normal life remained affected in the rest of the valley for the second day due to a two-day strike called by separatists to protest killing of the two militants and use of "brute force" against protestors.

The separatist trio - chairmen of both factions of Hurriyat Conference, Syed Ali Shah Geelani and Mirwaiz Umar Farooq, and JKLF chief Yasin Malik have also called for a march to Tral tomorrow to pay tributes to the slain militants.

While Malik was arrested from his residence in Srinagar on Sunday, Geelani and Mirwaiz are under house detention.

The authorities have suspended mobile internet services in the valley, while the outgoing call facility on prepaid numbers has also been snapped as a precautionary measure.

Kashmir University has postponed all examinations scheduled to be held today and tomorrow.

A spokesman of the university said fresh dates for the deferred examinations shall be notified later.

The university also suspended the class work for today in view of the prevailing situation.

Schools and colleges have also been closed for today in Srinagar and for two days in Pulwama.